IOB - Work in Progress - Evaluation of the ORET Programme: Investing in Public Infrastructure in Developing Countries

Public infrastructure is at the core of structural transformation in developing countries. It is also crucial to support social progress and to achieve the Millennium Development Goals.

The Development-Related Export Transactions programme (ORET, the Dutch acronym of Ontwikkelingsrelevante Export Transacties) began in 1979 and has been the longest running infrastructure facility of the Ministry of Foreign Affairs. ORET co-financed commercially non-viable investments in public infrastructure in developing countries by providing grants for 35% (in non-LDCs) to 50% (in LDCs) of the transaction costs. 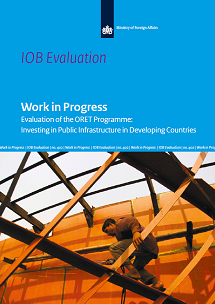 ORET was closed for new applications in August 2007. It was succeeded in 2009 by a new facility named ORIO, which in turn was closed in April 2014. This report presents the results of the final evaluation of ORET over the period since 2007.

The findings are based on a portfolio review of all 139 ORET transactions in the research period and 13 case studies consisting of 24 transactions. Recognising the political reality in the Netherlands, IOB offers suggestions for a successor programme focused more on poverty-alleviating infrastructure.