For decades, Dutch development cooperation has paid attention to renewable sources of energy in the context of development cooperation. In 2008 the minister for Development Cooperation announced a financial input of EUR 500 million for renewable energy programmes in developing countries through the ‘Promoting Renewable Energy Programme’ (PREP), which has been effective in providing more than 14 million people with access to renewable energy. Moreover, the ministry has also been effective in influencing the policy of development partners involved in energy investments.

The impact of renewable energy on well-being is considerable. The impact on income and expenditure is limited in the short run, but in the case of electricity it is positive in the long run. From a climate perspective, the evaluated interventions hardly contributed to a mitigation of global greenhouse gas emissions. 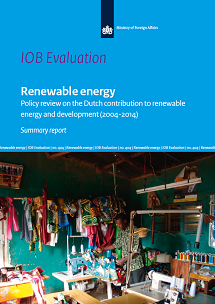