In 1999, in his message for the new millennium, the late Kofi Annan spoke words whose truth still resonates almost two decades later.
‘More than ever before in human history’, he said, ‘we share a common destiny. We can master it only if we face it together. And that, my friends, is why we have the United Nations.’ (…)

Mr Annan’s legacy is one of international cooperation.
Of fighting illiteracy, poverty, inequality and climate change as root causes of conflict and human rights violations.
Above all, his is a legacy of hope, and a firm belief that progress is the unifying theme in human history.
The Millennium Development Goals proved him right.
And it’s up to us, the leaders of the united nations of the world, to carry this legacy forward and make the Sustainable Development Goals and the Paris Climate Agreement a reality.

The Kingdom of the Netherlands remains firmly committed to international cooperation.
In fact, we have enshrined this commitment in article 90 of our Constitution, which states: ‘The Government shall promote the development of the international legal order.’
This provision reflects our moral compass.
But it also reflects our history as an open, seafaring, trading nation.
And the fact that our Kingdom consists of four countries in Europe and the Caribbean: Aruba, Curaçao, the Netherlands and St Maarten.
So we have understood for many centuries the necessity and benefits of a transnational outlook.

[Multilateralism is not optional]

And that is my core message today.
We need a transnational outlook to master the challenges we face.
There is no conflict between multilateralism and the national interest.
On the contrary.
After all, what country does not benefit from a stable and secure international environment?
From free and fair world trade?
From peace instead of armed conflict?
From prosperity instead of poverty?
From equality instead of inequity?
And what country can achieve these goals alone?
These are rhetorical questions, of course.
We should acknowledge that and act accordingly, which means we must embrace multilateralism. 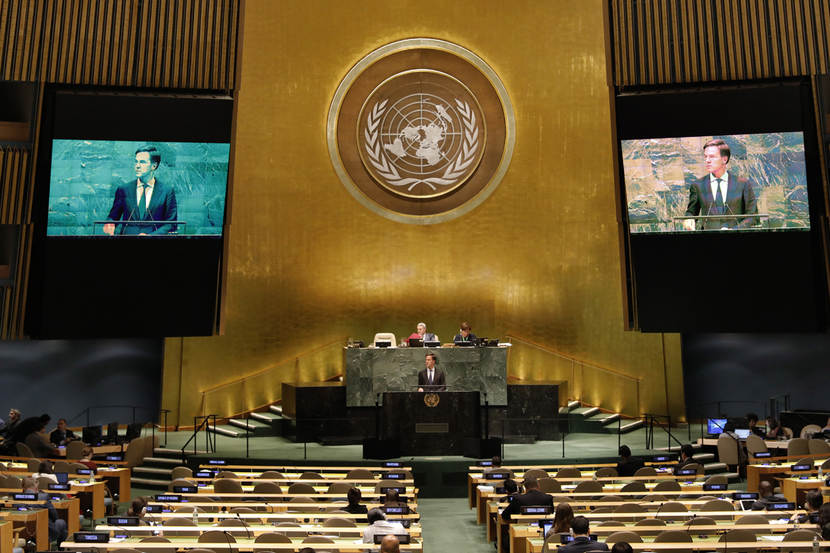 In May this year, the Joint Investigation Team presented conclusive evidence about the origin of the missile launcher that was used to down the aircraft. This has only bolstered our resolve that, in the interest of the victims and their loved ones, the full truth must be uncovered, justice served and responsibility accepted. In accordance with Security Council resolution 2166, we call on all states to fully cooperate with ongoing efforts to this end.

To the people of the Kingdom of the Netherlands this has only become more evident in the aftermath of the downing of flight MH17.
It remains an open wound for my country, and for all grieving nations who had nationals on board.
We are grateful for the support of the international community, as expressed in Security Council resolution 2166.
And we hope that together we will see justice done.
In May this year, the Joint Investigation Team presented conclusive evidence about the origin of the missile launcher that was used to down the aircraft.
This has only bolstered our resolve that, in the interest of the victims and their loved ones, the full truth must be uncovered, justice served and responsibility accepted.
In accordance with Security Council resolution 2166, we call on all states to fully cooperate with ongoing efforts to this end.

There can be no doubt that the rules-based multilateral order that arose after the Second World War has brought great things for many people.
That goes especially for the UN and this General Assembly.
And yet, for many other countries and peoples, this global order has not brought the same benefits.
In many parts of the world, peace, stability and prosperity cannot be taken for granted.

The multilateral system is not perfect, and it is under pressure.
The playing field is changing as we speak.
Some countries, for a range of reasons, have begun to embrace a different approach.
More and more often, sadly, compromise is being rejected in favour of polarisation and perceived self-interest.
We are witnessing a worrisome trend: some countries are shifting from a constructive to a combative approach in the multilateral environment.
What’s more, rising repression, human rights violations and shrinking freedom worldwide are a grave concern.
Accountability is often lacking.
And when the multilateral system becomes paralysed, it is innocent people who suffer.
Syria is a case in point.

In his last annual report Secretary-General Guterres wrote: ‘Working together multilaterally is not optional; it is the only answer.’
And I fully agree.
I believe in constructive multilateralism.
I believe in the power of principles and not the principles of power, to guide us towards a better future for more people.
And our best – perhaps even our only – way forward is not to give in to defeatism and cynicism, but to keep working to improve the system, step by step.

In that connection, let me emphasise once again that the Kingdom of the Netherlands firmly supports the Secretary-General’s reform agenda.
And that we applaud its first results.
The recent agreement on UN reforms sends a strong message of broad support for change.
But, as always, the proof of the pudding is in the eating.
Now we have to put words into action.
And by ‘we’ I mean the UN itself and the member states.

The UN system must be made fit-for-purpose to deliver on the 2030 Sustainable Development Agenda, which is the ultimate prevention agenda.
Take the staggering number of three thousand separate UN offices around the world.
That’s three thousand arguments for those who say that multilateralism just creates fragmentation and bureaucracy.
And they are not entirely wrong.
UN reform should bring down this number by at least a thousand, through co-location, use of common premises and services, and stronger collaboration.
That’s a thousand arguments for improving multilateralism.
And this is just one example of the broader effort that is required to help the Secretary-General’s reform drive succeed.

Another important initiative is the Secretary-General’s Action for Peacekeeping agenda.
Peacekeeping is at the heart of the UN, and we need to keep this instrument up to date.
Reforms within the Secretariat and in missions in the field, like the introduction of rotation schemes, will help make peacekeeping missions more effective.

Member states, for their part, will have to match their words with deeds and money.
Supporting change is not a free lunch.
That’s why, for example, the Kingdom of the Netherlands was the first member state to announce funding for a reformed Resident Coordinator system that will raise the efficiency of the UN development system.
And it’s why, earlier this week, I transferred the intellectual property rights of the Dutch Travel Information Portal to the United Nations.
This system, which maps the travel movements of terrorists and organised crime syndicates, will now be accessible to all member states.
It’s practical steps like these which improve the UN.
Our UN.

And when we look at the UN institutions we must not mince our words.
We must tell it like it is.
Sexual exploitation and abuse and sexual harassment committed by people working for UN missions and organisations is unacceptable.
In every case and in every place.
No exceptions.
This kind of misconduct undermines the core principles of the UN and – as the Secretary-General has rightly pointed out – zero tolerance is the only possible response.
So we must put the new policies in place without hesitation, and act on them.
We must make sure that victims feel heard and supported, and that whistle-blowers are protected.
The UN is meant to save and improve lives, not destroy them.
Here we must draw a clear line.

Of course, improving the multilateral system is not only about institutions and organising principles.
These are only means to an end.
Above all it’s about what we do and why we do it.
Over the years we’ve gradually learned that the only way to solve problems is to tackle their root causes.
We’ve learned that systematically reducing poverty demands more than money alone.
That ending an armed conflict takes more than Blue Helmets alone.
That gender equality and education are essential for peace and development.
And that sustainability, climate resilience and international stability go hand in hand.
The Sustainable Development Goals are built on this concept of integrated thinking and action.

Which brings me to a topic that is very important to me personally and to the Kingdom of the Netherlands: water management and adapting to climate change.
The global water crisis affects us all, in the form of increasing droughts, floods or pollution.
As a member of  the former High-Level Panel on Water, I hope that the Agenda for Water Action we presented earlier this year will inspire others to scale up their action on water.
We need to give the value of water greater weight in the economic, social, environmental and other choices we make.

It’s easy to be cynical and criticise the multilateral system. It’s harder to make improvements and reforms that will take us forward, step by step. But constructive multilateralism is the only way to make progress. That’s what we are working for.

For the Kingdom of the Netherlands, this is self-evident.
Amsterdam Airport is the only airport in the world that lies below sea level.
Over four metres below sea level, in fact.
So you can imagine that rising sea levels and the increase in extreme weather are of serious concern to us.
As they are for the Caribbean parts of our kingdom, which are especially vulnerable during the hurricane season.

It goes without saying that we welcome the recent announcement of a new Global Commission on Adaptation.
We are proud to be hosting the launch event in my home town of The Hague on October 16th.
And of course we are looking forward to next year’s Climate Summit in New York.
It should provide a platform to delve deeper into the links between climate resilience, financing and security.
Because climate and water are, by their nature, issues that can only be dealt with multilaterally, using an integrated approach.
The Paris Agreement and SDG 13 set clear objectives.
But water cuts across all the SDGs.
What we need now is international transparency, fair market mechanisms and a level playing field, so that all countries can do their part in adapting to climate change.

Your Excellencies, ladies and gentleman,
During last year’s election of Dutch UN Youth Representatives, the young candidates were asked what global issue they would address first if elected.
You might expect an answer like ‘world peace’, ‘eradicating poverty’ or ‘ending war’.
But one of them said, ‘I would tackle cynicism first. We can change things. But we have to believe we can. To roll up our sleeves and get started. Cynicism will get us nowhere.’
(…)

I think we should take inspiration from those words.
It’s easy to be cynical and criticise the multilateral system.
It’s harder to make improvements and reforms that will take us forward, step by step.
But constructive multilateralism is the only way to make progress.
That’s what we are working for.
And not only as a member of the Security Council until December 31st, but also afterwards, and in other international fora.
To that end, the Kingdom of the Netherlands will stand as a candidate for the Human Rights Council for the 2020 to 2022 term.
We will proceed in the spirit of Kofi Annan, who once said, ‘We need to keep hope alive and strive to do better.’
Thank you.