“We are here to lay the foundations upon which the statesmen of the western democracies may stand, and to create an atmosphere favourable to the decisions to which they may be led.”

You may well think that that is quite an ambitious task for today. However, these are not my own words but a quotation by Winston Churchill. Churchill was one of the founders of Europe and his primary objective in 1948 was to make it clear to Europe that the key issue was cooperation. Following the catastrophe that was   World War Two, what was needed more than anything was a willingness to work together.

In the trenches and in the face of shell fire of the First World War, in concentration camps and in bombed-out cities, in gulags and while queueing for food, men and women had dreamed of an undivided and free Europe.

Thanks to the sacrifice of American young men only 18 and 19 years old on the beaches of Normandy, and the Marshall aid that followed the war, that free Europe became reality.

Thanks to people like Churchill, who through their strength showed us the signs of hope, a undivided Europe arose around us.

However, the European project is never complete.

It is always in a state of flux. 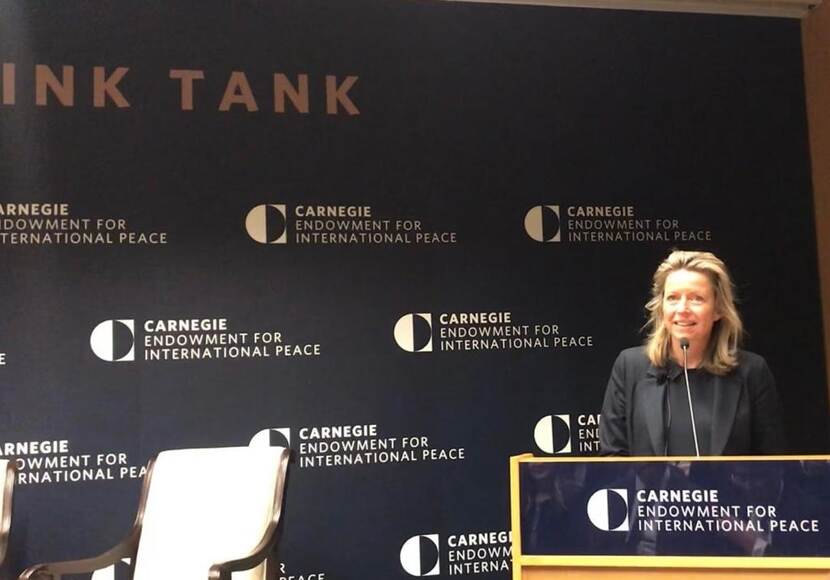 Cooperation in Europe is remarkable for its ambition and perseverance. It is a task that requires our constant attention and hard work. It is a form of cooperation that for many people is a constant source of surprise and even admiration.

How is it possible that countries are willing to give up their own currencies for a new single currency? How is it possible for a group of countries to voluntarily surrender part of their national sovereignty? How can it be that a group of countries once so torn apart by war cooperate so closely? With remarkable speed, Europe has rebuilt itself and become one of the world’s largest trading partnerships, with 500 million consumers.

Nonetheless, the foundations to which Churchill referred are not purely economic. It should go deeper than that. As a consequence of that devastating war and regimes of terror, we understand better than anyone what it means to be robbed of the most elementary fundamental rights and of basic human dignities. In response, over the last 70 years, we have joined Churchill in stating that the fundamental rights of every citizen in Europe must be protected.

However, this is not self-evident. It demands constant effort, certainly in the current era in which internal and external forces are threatening democracy and its intrinsic values.

We are faced with the major challenge of upholding those values in the modern digital domain.

Let me give you a few examples:

Last May, the European General Data Protection Regulation (GDPR) was introduced. It is the aim of Europe – even in the digital world – to continue to protect the privacy of Europeans; a fundamental right of which the founders of Europe in their age of telegrams and fixed telephony were probably not even aware.

We not only wish to take the lead in guaranteeing privacy in the digital domain. We also hope to take the lead in countering cyber threats and disinformation, two phenomena that clearly threaten public confidence in fair and free elections. Recent examples have made that abundantly clear.

During the referendum about the Brexit, some people went to the polling station with a pen in their hand. They were worried that a vote marked in pencil could be rubbed out. And if you did use a pencil, the message was ‘make sure you press hard’. That way your cross would remain visible.

Last year saw elections in Italy. A great deal of fake news was spread via social media. Politicians were accused of nepotism, at the taxpayers’ expense. It all turned out to be incorrect, but it increased the distrust of citizens in politics.

And during the French presidential elections, the then candidate Macron reported that his party’s websites were the targets of cyber attacks.

My visit so far has strengthened me in saying: the threats are real, on both sides of the Atlantic. We need to step up our game.

Making sure elections are free and fair is a core task for government.

However, it happens at a boundary line. As government, you wish to protect the freedom of speech. Government is not an arbitrary of truth. You never want to censure or to restrict the debate.

Our approach is twofold.

Firstly, we step up our efforts to make sure that technology operates in the interests of democracy. Representatives of Google, Facebook, Twitter among others signed the EU code of practice against disinformation. In our view, self-regulation of this kind is a meaningful first step by these companies, in accepting their responsibility. We will continue to closely monitor developments. But we need more. Transparency and engagement in the light of elections that are coming up.

Secondly, we step up to strengthen the resilience of our democratic systems. The Dutch government is planning a campaign to raise awareness on media literacy. The campaign will pass no judgements on the truthfulness of content. It is instead up to citizens to decide for themselves.

I am in the US today, because these problems are not exclusive to the EU. That is precisely why I am so interested in understanding your views on these issues and so keen to hear about your approach. We need to reach out, across the Atlantic, scientific communities, civil societies, all of us!

We represent the fruits of a shared history that stretches from Jerusalem and Athens to Amsterdam and Washington. We share a civilisation. That unity of values and desires presents us with new tasks and challenges. The values of that civilisation are universal, and in a unique way permeate our history and our solidarity.

The central lesson of the past century that if Europe and America and divided, the outcome is generally tragic, but that if we stand together then we can overcome any calamity. Perhaps today we could again succeed in laying foundations upon which, in the words of Churchill, our ‘western democracies may stand’; but this time in the digital age.