Foreign minister Frans Timmermans and his Russian counterpart Sergei Lavrov have met in Moscow to discuss the Russian-Dutch Bilateral Year 2013. President Putin will come to the Netherlands on 8 April for the opening ceremony. Russia plans on this occasion to formalise several agreements on cooperation with the Netherlands. 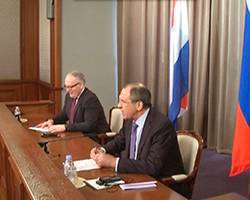 The Russian-Dutch Bilateral Year will be marked by some 350 events, including a Mondriaan exhibition, an open air festival in Moscow's Gorky Park and performances by the Royal Concertgebouw Orchestra.

The two foreign ministers also discussed ways of deepening economic cooperation. Mr Timmermans will investigate whether the visa procedure for Russian citizens can be simplified to make it easier for them to travel to the Netherlands.

The Netherlands is Russia's main export destination. In 2011 imports from Russia – mainly oil and gas – totalled almost €19 billion. Mr Timmermans told Mr Lavrov that there is also potential for Russia on the Dutch consumer market, notably for Lukoil filling stations .

Russia is the Netherlands’ third largest export market outside the EU, after the US and China. Dutch exports to Russia, mainly agricultural machinery and flowers, total €6.7 billion.

Another important topic discussed by the two ministers was the human rights situation in the Netherlands and Russia, and in particular Russian legislation against so-called ‘gay propaganda’. Mr Timmermans called Mr Lavrov to account on Russia's obligations under the Universal Declaration of Human Rights and the European Convention on Human Rights.

‘Since we have both set our signatures to these agreements, we can call each other to account about our obligations,’ said Mr Timmermans, ‘I am also open to criticism about the Netherlands’ shortcomings.’

While in Moscow, Mr Timmermans also met with representatives of NGOs actively involved in promoting respect for human rights, including gay rights, and the fight against corruption and human trafficking.

The Netherlands is working with Russia on strengthening the rule of law and the legal system, and on tackling international human trafficking and child labour worldwide.