From Monday onwards, Chinook transport helicopters of the Netherlands Defence organisation and Royal Netherlands Air Force ground personnel will be on stand-by at shortened response times to support the fire service in fighting large-scale wildfires. 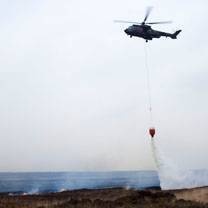 A Cougar helicopter using a bambi bucket during a heath fire.

The Security Regions Authority requested that Defence Helicopter Command’s transport helicopters be made available for fighting fires that cannot be controlled by civilian fire services alone. In the past few years, both Cougar and Chinook helicopters were extremely effective during firefighting operations dealing with extensive wildfires or other major fires.

Dutch armed forces helicopters have also been active on the international stage, seeing action during the extensive forest fires in Portugal (2006) and Greece (2007). Per flight, the helicopters are capable of dropping 2,500 or 10,000 litres of water on the seat of a fire. They can also set up a water curtain to protect objects from the fire and prevent the fire spreading.