Ten countries met today in The Hague to discuss nuclear disarmament and practical steps to tackle the further spread of nuclear weapons. ‘We are working towards a nuclear-weapons-free world,’ said foreign minister Frans Timmermans, the host of the conference.

‘It is crucial to reduce nuclear arsenals and keep nuclear weapons out of the hands of terrorists, criminals and dangerous regimes,’ said the minister. ‘The goal of the Non-Proliferation and Disarmament Initiative (NPDI) is to make progress by taking practical steps regarding disarmament and non-proliferation.’

The NPDI consists of ten countries – Australia, Canada, Chile, Germany, Japan, Mexico, the Netherlands, Poland, Turkey and the United Arab Emirates – that first came together at the initiative of Japan and Australia in 2010. The member of the NPDI call on all countries that have not yet done so to ratify the Non-Proliferation Treaty and other international legal instruments that constitute the building blocks for the formation of a nuclear-weapons-free world.

The NPDI countries support non-proliferation and disarmament in practical ways and offer technical assistance, in cooperation with the International Atomic Energy Agency (IAEA). They are prepared to share their own experiences and good practices with others.

The NPDI:
•    encourages nuclear-weapon states to practise greater transparency with regard to their nuclear arsenals and to reduce the role and significance of nuclear weapons in their military doctrines;
•    calls on nuclear-weapon states to include all categories of nuclear weapons in future disarmament talks, even non-strategic nuclear weapons, which have never before been part of arms reduction   negotiations;
•    calls on all countries that have not yet signed and ratified the Comprehensive Test Ban Treaty (CTBT) to do so and to establish a permanent moratorium on nuclear tests in the interim, an essential step towards a nuclear-weapons-free world;
•    calls for the immediate opening of negotiations on a treaty that will end the production of fissile material for nuclear weapons.

The NPDI countries strongly condemn the recent North Korean nuclear test and call on Iran to abide by its international obligations regarding its nuclear programmes. 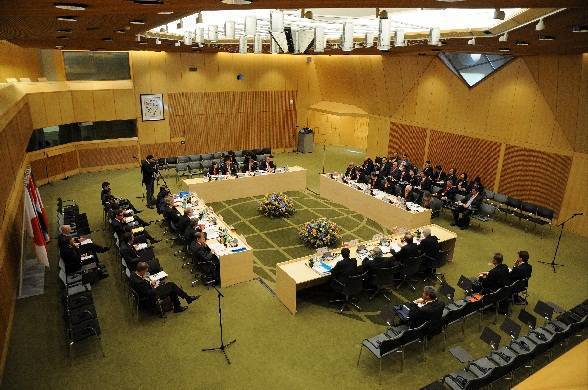