High temperatures, a mountainous area and a dusty environment. These are three typical conditions under which Dutch military personnel have to work in current mission areas. However, they can hardly prepare or train for these circumstances in the Netherlands. The large European helicopter exercise Hot Blade 2013 in Ovar, Portugal, offers the solution to this problem, both for training in the air and on the ground. 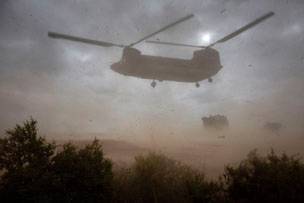 Chinook during a so-called brown-out.

Hot Blade offers an exercise area that covering an area about half the size of Portugal.  Military personnel of the Defence Helicopter Command and 11 Airmobile Brigade are free to use the area until 31 July.  The aim for the Chinook and Cougar crews and airmobile units is to become and to stay mission ready and to prepare them for extreme circumstances. Another aim is to train for conducting international operations in cooperation with other European countries. The combined exercise covers all aspects, from mission planning to execution.

The Dutch contingent at Hot Blade consists of 4 Chinooks, 1 Cougar transport helicopter, 124 air force personnel and more than 100 army personnel. Along with host country Portugal, Belgium, Germany and Austria, the Netherlands deploys helicopters and ground troops during various missions, which are planned and executed according to an overarching scenario. The air force and the army join forces during evacuations and escorts, as well as during attacks from the air with the help of airmobile units.