Foreign minister Frans Timmermans commended countries in Africa and the African Union for assuming increased responsibility for conflict resolution on the continent. ‘The Netherlands supports African solutions to African problems,’ he said at a meeting with 36 ambassadors from sub-Saharan Africa in The Hague today. 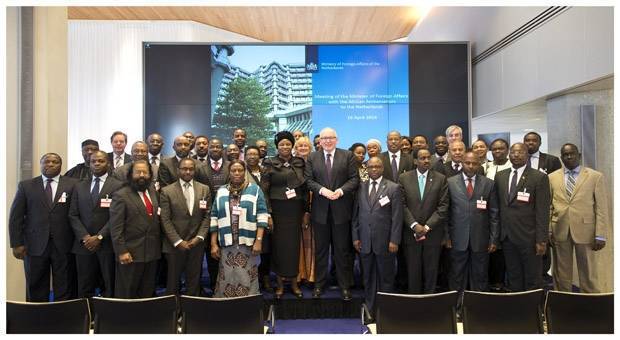 Cooperation in the area of peace and security was discussed at length. The minister pointed out that, while Africa has generally become more secure and stable, the conflicts in Mali, the Central African Republic and South Sudan give cause for concern. Mr Timmermans emphasised the importance of African contributions to the international legal order and urged the ambassadors to continue working for justice and reconciliation, including through the International Criminal Court. Progress, he said, is contingent on respect for human rights, an open democracy and the rule of law, and the Netherlands and African countries should not shy away from an open, honest dialogue on these issues.

Economic relations were also discussed at the meeting. Over half of the world’s ten fastest-growing economies are African. ‘Dutch know-how and skill and Africa’s economic development make a good pair and offer opportunities all round,’ Mr Timmermans said. ‘The nature of our partnership has changed over the years, in keeping with developments in our countries.’ The minister cited Tanzania, which has selected the Netherlands as a partner for developing its oil and gas sector. The Netherlands’ hopes that this joint undertaking will help reduce poverty through economic growth. The Netherlands also sets great store by sustainability and responsible business practices, the minister said.

Mr Timmermans assured the ambassadors that he aims to further strengthen the Netherlands’ ties with Africa. To underscore this aim, the meeting was followed by a networking reception with Dutch companies and trade associations that are active in Africa.

Earlier this month Mr Timmermans attended the EU-Africa Summit in Brussels and the 20th Commemoration of the Rwandan Genocide.