On 16-17 June 2014, Prime Minister Mark Rutte payed an official visit to Vietnam. He was accompanied by Minister for Agriculture Sharon Dijksma and a trade delegation consisting of representatives of 22 Dutch companies.

The Netherlands and Vietnam have much to offer each other, on the political, cultural and economic plane. Within the EU, the Netherlands is the biggest investor in Vietnam and its third-biggest trading partner. A relationship that used to be based on development cooperation has turned into one based on trade and investment, with great opportunities for Dutch business, especially in the areas of water, shipbuilding, agriculture, energy, and logistics.

On Monday morning 16 June Mr Rutte and Ms Dijksma first made a tour of a few places of cultural interest in Hanoi, followed by a meeting with Vietnamese Prime Minister Nguyen Tan Dung. Mr Rutte and Mr Dung discussed the close diplomatic and economic relations between the Netherlands and Vietnam and the scope for further cooperation. Afterwards, they signed an agriculture and food security partnership agreement. The first day ended with an official dinner, where Mr Rutte held a speech on Dutch-Vietnamese relations.

Mr Rutte closed his trip to Vietnam in the afternoon with a visit to two of the 120 Dutch companies operating in Vietnam. In the port city of Hai Phong, he attended a ceremony marking the launch of a plan to construct a depot by Rotterdam-based warehousing company C. Steinweg. He then visited the new Damen Song Cam Shipyard, a joint venture between the Dutch Damen Group and the Vietnamese company Song Cam Shipyard.

Overview of economic relations between the Netherlands and Vietnam 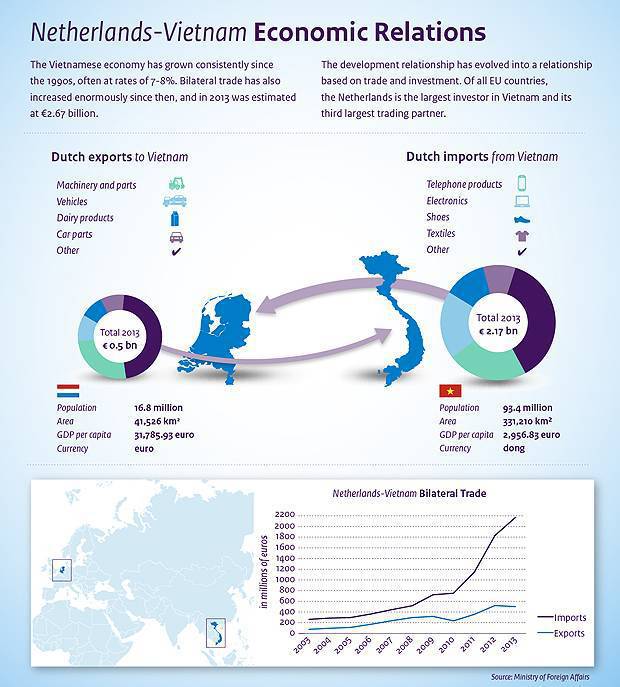