Ploumen: Appreciation for relief work in the Philippines

Aid organisations are working hard to rebuild the Philippines in the wake of the devastation caused by Typhoon Haiyan in November 2013, in which 6,000 people died and millions were made homeless. This was the conclusion drawn by the Minister for Foreign Trade and Development Cooperation Lilianne Ploumen following her visit to the affected area with the President of the World Bank Jim Yong Kim. 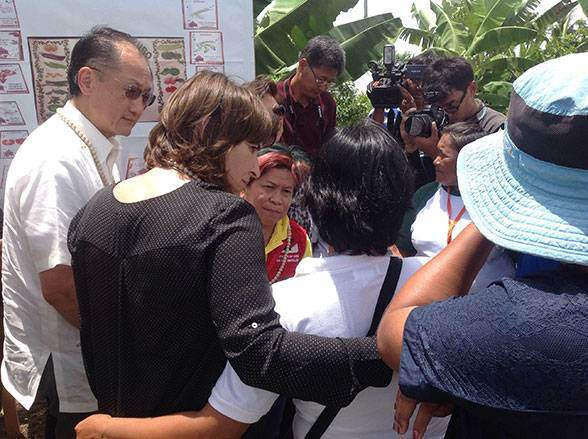 'It is wonderful to see how hard people on the island of Leyte are working to rebuild homes and schools, with the support of aid organisations,' Ms Ploumen said. 'The worst typhoon in living memory caused immeasurable damage and the scars are still raw. But little by little, the people worst affected are beginning to see a more promising future.'

Shortly after the disaster the Dutch government earmarked € 6 million in emergency aid. A Ministry of Defence aeroplane made 2 trips to fly relief supplies to the affected area, as did a KLM plane. And the joint Dutch aid agencies collected € 36 million in donations for emergency aid and reconstruction through the Giro 555 appeal.

Relief work is in full swing. Since the typhoon struck, 4.6 million people have received food aid and accommodation has been provided for 570,000 families. Schools, hospitals and public buildings are being rebuilt.

Almost 6 million people lost their source of income as a result of the disaster. Aid organisations have set up cash-for-work initiatives and are providing vocational courses so that people can retrain in professions such as carpentry. Support for small businesses is available in the form of financing and loans. The Filipino government has also launched the FAITH programme, a public website which shows how aid is being used.

'Much has been achieved over the last 8 months, but there is still a long way to go,' Ms Ploumen said. 'The Filipino government is investing in better housing and wants to make the country more resistant to natural disasters, which are affecting this region with increasing frequency. There is little sense in building poor-quality housing or using the same unsafe locations as before. This is now being taken into account.'

Aid organisations say that the scale of the disaster area (approximately the size of Portugal) poses a real challenge. The aid effort is also being slowed down by the lack of clarity about land ownership rights.

'To maximise efficiency, organisations like the World Bank are working together to ensure that aid efforts are as well-coordinated as possible. I've been able to see that with my own eyes here in the disaster area, together with President Kim of the World Bank. There is still a lot of human suffering, but fortunately aid activities are well coordinated and are being carried out efficiently,' Ms Ploumen said.

Since 6 July 5 experts from the Dutch Risk Reduction (DRR) Team have been in the Philippines to identify how to make the country more resistant to future natural disasters. They presented their initial findings and recommendations during Ms Ploumen's visit.

In recent days the team, consisting of experts from Royal HaskoningDHV, Deltares, the Red Cross, Wetlands and Cordaid, has met with the authorities in Manila, spoken to local experts and authorities in Tacloban and made field visits to the affected area. They are examining the option of strengthening the coastline by creating barriers, planting mangrove trees and reclaiming land.

'The Filipino authorities I have spoken to are enthusiastic about Dutch expertise,' said Ms Ploumen. 'Our water sector has a great deal of experience that can be used to prevent the next hurricane claiming so many victims.' The team is expected to publish an advisory report at the end of this week.

The DRR Team, a joint initiative of Ms Ploumen and the Minister of Infrastructure and the Environment, Melanie Schultz van Haegen, is a pool of experts representing businesses, knowledge institutions, NGOs and government in the Dutch water sector who can be deployed at short notice in the event of floods, drought and water pollution. The team focuses on reconstruction and prevention rather than emergency aid. While the main focus is on advising on solutions, the teams can also identify or help create opportunities for Dutch companies to get involved.