Agricultural exports from the Netherlands topped 80 billion Euros last year (80.7 billion), up from 2013's record levels of 79 billion. Dutch Minister for Agriculture Sharon Dijksma made the customary announcement at the International Green Week in Berlin, the world's largest agricultural trade fair. The figures are based on LEI Wageningen UR estimates, and as in previous years, definitive figures are expected this spring.

As Minister Dijksma explained, "Last year was anything but easy for the Dutch agricultural sector: falling prices, a Russian boycott, and bird flu outbreaks have posed problems for many businesses in the Netherlands. It is impressive to see how Dutch farmers and agricultural entrepreneurs have managed to hold their own under these conditions. The figures tell the same tale: the Netherlands remains a global leader in agriculture, second only to the U.S. in terms of agricultural exports. Kudos for Dutch agriculture!"

Dutch trade in agricultural products primarily involves EU Member States. Seventy-seven percent of Dutch agricultural exports are destined for the other 27 EU countries. Germany is by far the Netherlands' most important trading partner, receiving nearly 26% of our agricultural exports with a total value of 20.7 billion Euros. Exports to Germany remained stable, with a drop of only 0.3 billion Euros compared to 2013 levels. Main Dutch exports to Germany include meat, dairy products and eggs, ornamentals, and fruit and vegetables. The export of dairy products increased by 9% compared to 2013. Cheese exports fell, while exports of butter and other dairy products rose. Exports of eggs and egg products are estimated to have fallen in 2014. Exports of fruit and vegetables also fell, by an estimated 4%. This decrease could be partly due to the Russian boycott. Top items in this produce group, with a share of over 50%, are tomatoes, bell peppers, and cucumbers. Meat exports rose by 2%, with a rise in the export of pork and poultry and a decrease in beef exports.

Berlin's International Green Week is the largest trade fair in the world for agriculture, horticulture, and food products. This year, 69 countries will participate and half a million visitors are expected. The Netherlands has taken part since 1953. This year's Dutch pavilion, with its slogan Qualität wächst in Holland, boasts representatives from the agriculture, horticulture, fisheries, and food industry of the Netherlands. 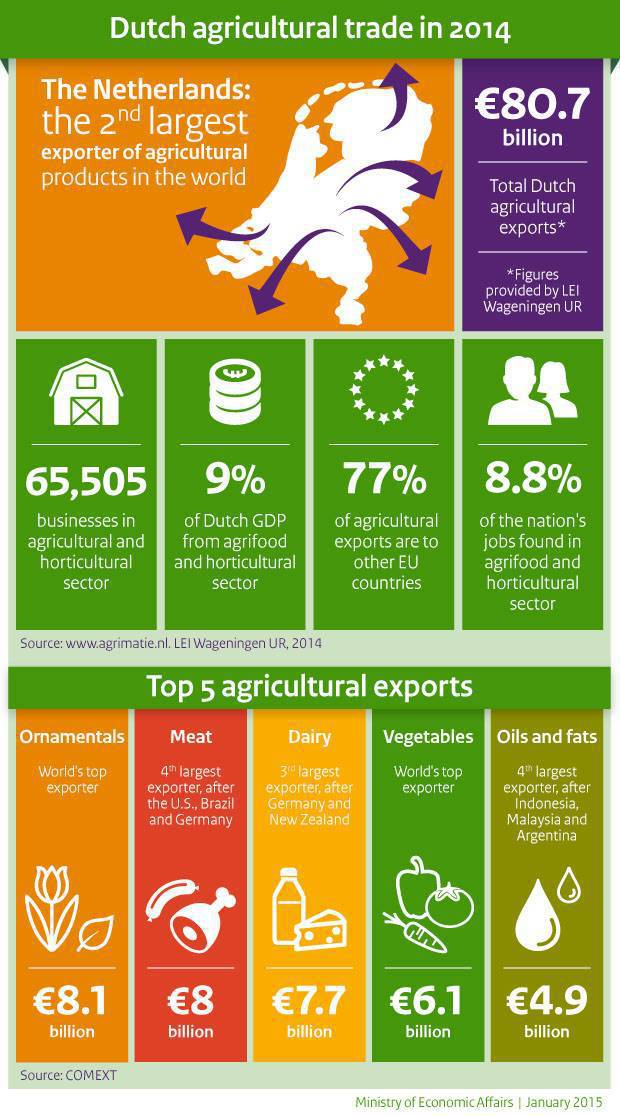