Koenders: ‘Dutch EU Presidency will focus on the essentials, innovation and connecting with citizens’

Today, on the recommendation of foreign minister Bert Koenders, the government submitted a letter to the House of Representatives outlining the three priorities of the Dutch Presidency of the Council of the EU in 2016: a Union that focuses on the essentials; creates growth and jobs through innovation; and actively involves citizens and civil society organisations in policymaking. 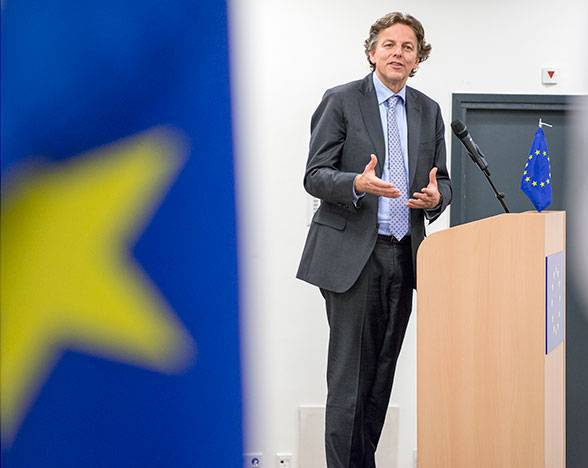 Foreign minister Bert Koenders during a meeting with European ambassadors in The Hague on 26 November 2014.

The Netherlands wants an innovative Union focused on growth and jobs. ‘Creating jobs and encouraging a sustainable, innovative economy are top priorities. The interests of citizens should be at the forefront of the EU. We envision a Union which – by daring to pursue innovation – enhances its economic and foreign policy clout and fosters Europe’s global competitiveness,’ Mr Koenders writes. The government is seeking to remove obstacles to innovation in the internal market, strengthen the digital economy, encourage national policy reform, and promote a society that renews and challenges itself.

The government wants a Union that focuses on the essentials and that adds value to those tasks that member states themselves can and must do. During its Presidency, the Netherlands will aim for both lasting improvements in the quality of legislation, making it simpler and more workable, and for a reduction in the administrative burden and associated costs. ‘This is important for citizens, SMEs, and municipalities and other authorities,’ notes the minister. ‘Upholding the rule of law and freedom of expression are essential issues that the Netherlands wishes to focus on.’

The government’s third priority for the Netherlands’ Presidency is creating a Union that connects. ‘This means a Union that is based on fundamental values and is supported by its citizens,’ Mr Koenders writes. Support for European decision-making can be generated by offering opportunities for meaningful public input and influence. For the government, strengthening democratic legitimacy will remain a key issue in the run-up to and during the Dutch Presidency. ‘This will require active involvement by people and civil society organisations, so they know that their views have been heard. The government wants to encourage this type of involvement. Transparency in decision-making is key. Support for the EU will also be strengthened if the Union actually achieves results for citizens and companies in areas that are important to them.’ This will be the focus of the Dutch government.

With these three priorities, the government is reflecting the strategic agenda that the European Council laid down last year. The Netherlands played a pioneering role in bringing about this agenda, which sets out five overarching priorities that will guide the work of the Union over the next five years, as it tackles the challenges it faces. These priorities are: a Union of jobs, growth and competitiveness; a Union that empowers and protects all citizens; towards an Energy Union with a forward-looking climate policy; a Union of freedom, security and justice; and the Union as a strong global actor.

‘The Commission, Council and European Parliament must now jointly aim for concrete results on the five objectives in the strategic agenda, which will produce clear improvements for European citizens and companies,’ Mr Koenders goes on to say. ‘The government wants to use the Dutch Presidency to help achieve such concrete results and will therefore make the strategic agenda the main focus in the run-up to and during the Presidency. This is vital if we are to build confidence and equip European societies for the future.’