In Kabul the ministers participated in an in-depth discussion of the progress of the Afghan peace negotiations and the creation of a unity government. Mr Koenders believes it is imperative for the Afghan government to address its priorities and institute reforms. ‘I support President Ghani’s initiative of engaging in a phased dialogue with the Taliban, reaching out to neighbouring countries like Pakistan, combating corruption, enhancing the rule of law, implementing economic reforms, and getting more women involved in the political process,’ he said. All parties must feel that they have a part in the peace process, Mr Koenders affirmed, noting that this was ‘the only way to achieve sustainable and inclusive peace and stability in Afghanistan and the wider region’.

In the fight against radicalisation, it is necessary to tackle the causal factors of terrorism. ‘We want the Afghan people to have better prospects. But this can only be achieved through an integrated approach that gives all Afghans a voice,’ Mr Koenders remarked. ‘And it needs to happen fast. Time is of the essence, both for Afghanistan’s security and for its economy. Afghanistan is at a crossroads. It’s time to switch on the GPS and hit the accelerator.’

The ministers noted that the violence unleashed by ISIS is also a threat to Afghanistan. ‘Together with the Afghan people, we must do everything possible to prevent this country from becoming a haven for terrorists and jihadists,’ they remarked. ‘After years of war and unrest, Afghans long to live in peace and security.’ This is why the Netherlands is participating in Operation Resolute Support with NATO and the Afghan army. At present, 100 Dutch military personnel are stationed in northern Afghanistan. The ministers paid a visit to their base in Mazar-e Sharif on Monday. ‘They are making a genuine contribution to a secure Afghanistan,’ said Mr Koenders and Ms Hennis-Plasschaert, who also took the opportunity to praise the Dutch team for their work.

Ms Hennis-Plasschaert is also pleased with the progress Afghan security forces are making in shouldering responsibility for Afghanistan’s security. ‘We are placing great demands on the Afghan army and police force. In the past two years, the number of international military personnel in Afghanistan has gone from 50,000 to 12,000. The Netherlands, NATO and other international partners continue to monitor the security situation in Afghanistan closely. This is vital to informing the decisions we have to make this year on continuing Resolute Support,’ she said, referring to the development of the ‘hub-and-spoke’ model spearheaded by NATO.

Ms Hennis-Plasschaert also discussed Resolute Support and other security challenges with her Afghan counterpart Enayatullah Nazari. ‘We live in an increasingly unstable world, and instability is moving closer to Europe. The larger region surrounding Afghanistan is also highly complex. We will need to continue to work together to address these challenges.’

While in Kabul the ministers also had opportunities to discuss the position of women, including during a meeting with a female member of parliament. Mr Koenders has decided to make additional funding available to help improve the lives of Afghan women. Limited interaction between Afghan men and women in public means there are few possibilities to engage in dialogue. To address this issue, €1.2 million will be used to finance a project to help women take part in online discussions with men about rights, culture, norms and traditions. ‘But,’ added Mr Koenders, ‘Dutch development cooperation will come to depend more and more on the Afghan government’s accelerated implementation of critical reforms. After all, development funding is only effective if it is used well.’

On Tuesday afternoon the ministers reflected on their joint visit to Afghanistan. ‘The country has been through a lot,’ they said. ‘Progress has been made at socioeconomic level, but major challenges remain. Afghanistan’s new leadership is providing much-needed momentum, and while expectations are high, we remain realistic. The Netherlands and the international community have been investing in a better future for the Afghan people for more than ten years now. And we will continue to do that in the interests of security in Afghanistan and stability in the region.’ 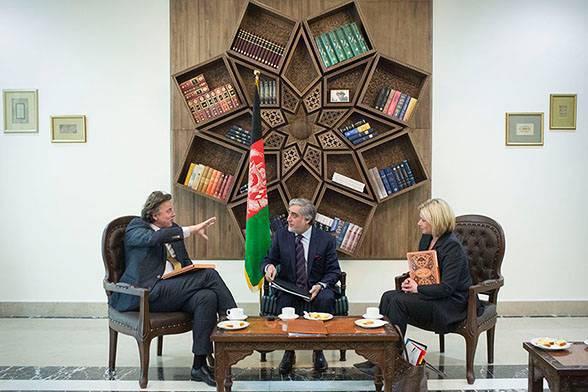