Koenders talks about opportunities and the road ahead in Cuba

Foreign minister Bert Koenders has rounded off his visit to Cuba. He is keen to step up cooperation with the country. ‘The road Cuba has been following creates opportunities for us to expand our good relationship with it and to identify new opportunities,’ said the minister, who referred to the visit as ‘historic’. 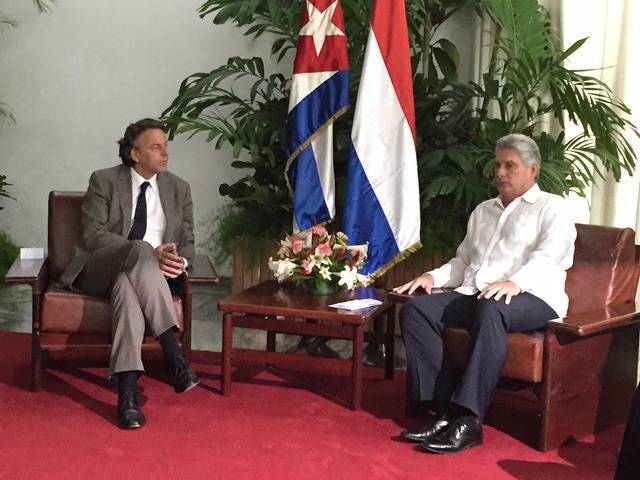 During Mr Koenders’ visit it was agreed that the two countries will work together more closely in several areas. ‘We’re thinking of exchanging knowledge on increasing agricultural production, offering expertise on water management and airport security, and sharing information on preventive health care,’ the minister said.

Cuba’s negotiations with the EU were also on the agenda. ‘The initial rounds of negotiations have gone well,’ said Mr Koenders. ‘It’s good to see that Cuba and the EU are scheduled to meet again soon and that a structured human rights dialogue is being launched.’ Negotiations have been ongoing between the EU and Cuba since April 2014 on a new bilateral agreement. The parties are looking at areas in which the EU can work with Cuba, such as the economy, trade and human rights. The Netherlands has played a leading role in getting this process underway and is set to continue its efforts for closer cooperation between the EU and Cuba.

During his visit Mr Koenders also met with civil society representatives, including writers, bloggers and economists. ‘The recent developments in Cuba are encouraging,’ he remarked. ‘It’s important engage civil society in dialogue about those developments. In my talks I emphasised that it’s crucial to improve the human rights situation in Cuba.’ The Netherlands and Cuba are both members of the Human Rights Council. Mr Koenders agreed with his Cuban counterparts that they would hold talks in the run-up to the Human Rights Council sessions in June and September.

This weekend sees Cuba’s annual gay pride event in Havana. ‘I’m impressed by the steps Cuba has taken to protect the rights of gay, lesbian, bisexual and transsexual people,’ said Mr Koenders, referring to the recent legislative changes on this issue in Cuba. ‘I hope Cuba will continue along this route with regard to all aspects of human, socioeconomic, cultural, civil and political rights.’ The Netherlands maintains close contacts with Cubans promoting human rights, like Mariela Castro.

‘The cooperation between our two countries offers many opportunities for businesses throughout the Kingdom,’ the minister believes. In June and July there will be trade missions to Cuba from Aruba and Curaçao, heralding new transport links between the Caribbean parts of the Kingdom and Cuba. The US has announced that direct flights between New York and Cuba will start soon. Various airlines already fly directly from the Netherlands to Cuba several times a week. They will use larger aircraft from now on, to meet the growing demand. ‘That is a tangible sign of increasing exchanges and cooperation, which I welcome,’ said Mr Koenders. ‘The Netherlands is Cuba’s second biggest European trade partner and in the top five of Cuba’s export markets.’

Mr Koenders’ visit is part of a wider visit to the Caribbean region. He has already visited Aruba, Curaçao and St Maarten. After Cuba, he will be travelling to Guatemala and Mexico.