Ploumen and the Pope discuss climate

‘It’s fantastic that Pope Francis is to make a statement on climate change,’ said foreign minister Lilianne Ploumen after her meeting with him today. ‘We face huge challenges that will require efforts from all of us, including religious leaders. With their influence and authority they can have a positive impact on the debate. This is vital in the run-up to the climate summit in Paris.’

Ms Ploumen was at the Vatican for a conference on climate co-organised by the Netherlands, ahead of the Pope’s letter to clergy on climate change which is expected this summer. Along with other speakers, the minister had a private audience with the Pope. Ms Ploumen believes the Pope can play an important connecting role in the global climate negotiations that should lead to the signing of a new climate agreement in Paris at the end of the year. ‘This issue highlights traditional divisions, between developing countries and emerging economies, and also between NGOs and the private sector. Those divisions have to be addressed and Pope Francis is in a unique position to call all parties to account. It would be good if other religious leaders were to follow his example.’

The main subject of the conference was the relationship between climate and the economy. In her speech to the assembled representatives of the Vatican and participating companies Ms Ploumen underlined the importance of cooperation: ‘Tackling climate change will cost money. But it will also bring us many benefits, and that is where the potential for cooperation between the authorities and industry lies. Companies have the know-how and the inventiveness to come up with the solutions we need. Solutions that will pay for themselves, and attract more investors.’ The Netherlands and Dutch companies are for example investing in Africa’s largest wind farm: good for the climate and good for investors’ returns.

It is above all the most vulnerable groups and the poorest countries – which are likely to be hit hardest by climate change – that will benefit from public-private partnership, Ms Ploumen said. ‘If we do not take action, according to the UN two-thirds of farmland in Africa will be lost by 2025 due to climate change. The number of people affected by flooding and other natural disasters grows every year, especially in developing countries. And yet these are not insurmountable problems: we have the knowledge and ability to deal with them.’

The Netherlands leads the field when it comes to public-private cooperation to promote development and tackle climate change, and has a particularly strong reputation for water management and agriculture. The Dutch Agriculture, Water and Climate Alliance was for example established in 2014. This partnership between Dutch companies, NGOs and knowledge institutions works with local communities in developing countries to set up profitable climate projects. The Netherlands is also contributing €100 million to the international Green Climate Fund, which promotes climate investments in developing countries.

Other participants at the Vatican conference included Paul Polman, CEO of Unilever, Felipe Calderón, former president of Mexico and chair of the Global Commission on the Economy and Climate, and representatives of science and industry. The Pope is expected to issue his letter in June. 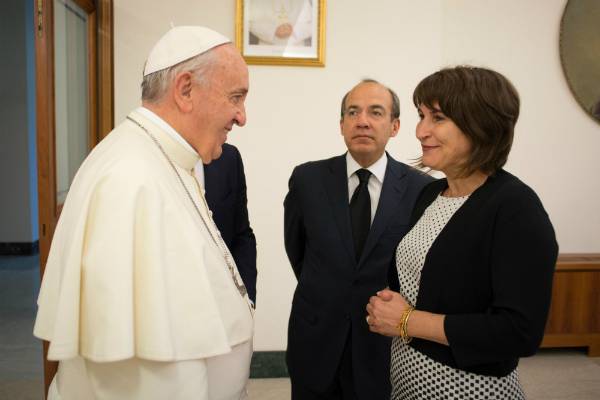