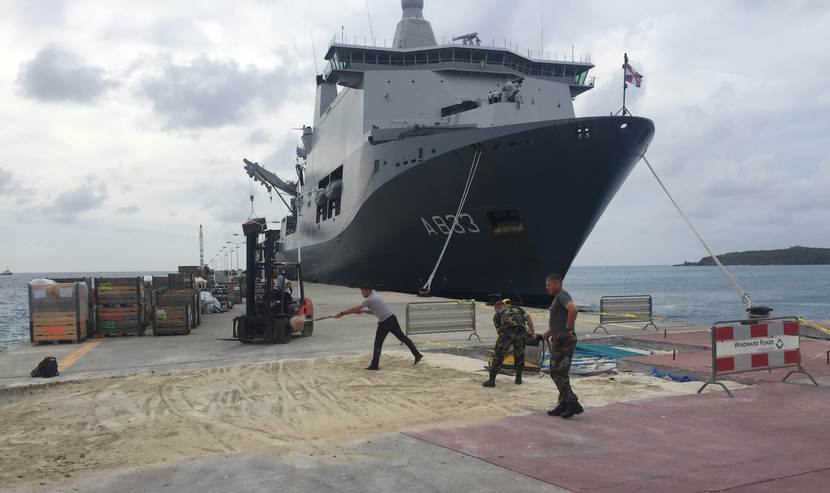 After the ship’s arrival, organisations including the Red Cross and the local hospital, ministries and police came and collected the goods that had been allocated to them, according to a carefully coordinated schedule. The enormous quantities of goods were unloaded in an orderly manner, with efforts being coordinated by the Ministry of the Interior and Kingdom Affairs.

The ship had departed for the Caribbean region in September, following hurricane Irma, and had already delivered one million kilos of emergency aid to St Maarten. The Karel Doorman has since also provided emergency assistance to various other islands in the region.

Since early September, military aircraft and naval vessels have delivered a total of 2,260 tonnes of emergency aid to St Maarten, which was ravaged by hurricane Irma. The aid included food, water, tarpaulins and vehicles. Around one million litres of water have been distributed.

Hercules transport aircraft from the Dutch and Belgian air forces made 35 trips from Curaçao to St Maarten and, on the return legs, transported a total of 1,804 evacuees off the island. Even larger aircraft made eight trips from the Netherlands to Curaçao loaded with emergency aid, in operation which was arranged in cooperation with France. These flights delivered a total of 550 tonnes of aid.

Over the past weeks, soldiers and Urban Search and Rescue (USAR) emergency workers have repaired essential buildings including the airport, the hospital and schools. Roads have been made passable and debris and fallen trees have been cleared away. Teams have also visited neighbourhoods to carry out repairs for those hardest hit, which included repairing roofs.

On Friday State Secretary for the Interior and Kingdom Relations Raymond Knops announced that, so far, a total of €55 million in emergency assistance has been provided to the affected islands. Most of this had been received by St Maarten, where the devastation was worse than on Saba and St Eustatius.