Blok opens hospital in Iraq: ‘After ISIS’s defeat, Netherlands is helping to rebuild’

Even after the military defeat of ISIS, the Netherlands will continue working to ensure security and stability in Iraq and the wider region. Foreign minister Stef Blok made this point during his trip to Jordan and Iraq. ‘We have to do this to prevent ISIS from regaining strength,’ he said.

Since the Netherlands joined the international fight against ISIS in 2014, the campaign has enjoyed great success. Almost all the territory once controlled by the group has been retaken. More than 7 million people have been freed from ISIS’s rule, and displaced people are returning to their homes and resuming their lives.

‘Now that ISIS has been defeated militarily, the focus is shifting to post-war reconstruction,’ Mr Blok said. ‘Putting ISIS combatants on trial is also crucial. Security and stability are preconditions for proceeding with the next phase. The Netherlands is working to strengthen its ties with Iraq and Jordan. That’s why I think it’s important for me to be here, so that we can set to work together on enhancing security.’ The Dutch partnership with Iraq and Jordan has already taken off. For example, last month in The Hague Mr Blok and Jordanian King Abdullah II both took part in the international ‘Aqaba meetings’ on counterterrorism.

A year ago Iraq was declared liberated from ISIS. In 2019 Dutch efforts will focus on capacity building in Iraq’s security sector. About 70 Dutch military personnel are currently training Iraqi security forces, including Kurdish Peshmerga. ‘The work of these Dutch trainers has great added value,’ said the Dutch foreign minister. ‘Their labours will equip Iraq to meet its own future security needs.’

Stability in Iraq is in the Netherlands’ interests. It will reduce the threat of terrorism, lower the risk of new refugee flows, and increase the likelihood of return for displaced people. ‘I’m seeing here with my own eyes how much devastation ISIS’s terror caused,’ said Mr Blok. ‘It’s in this phase above all, as Iraq rebuilds, that the Netherlands can help the country ensure that its victory over ISIS is a lasting one. That will allow the displaced and the refugees to return home.’ 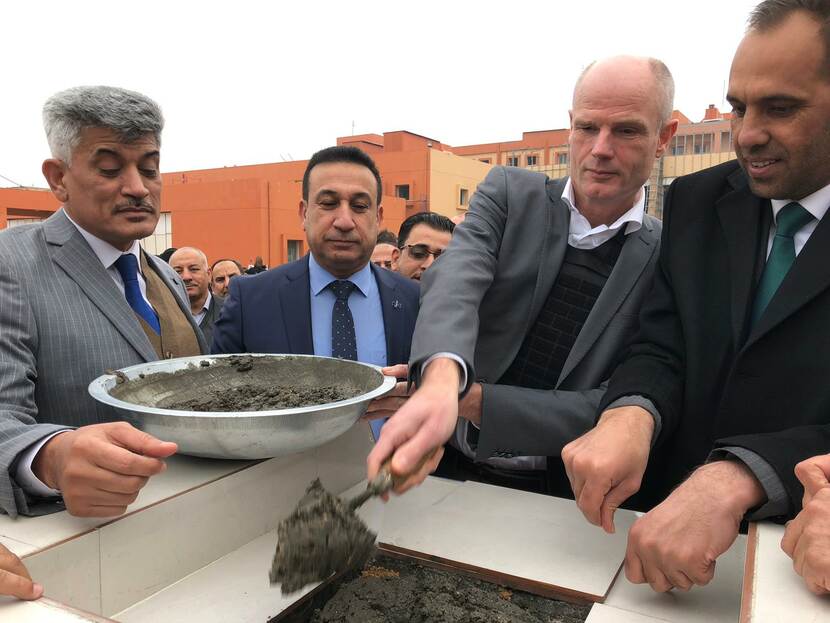 During his visit to the Iraqi city of Fallujah, the Dutch minister reopened a hospital that had been damaged in the fighting. ‘There was a huge battle against ISIS in Fallujah,’ he said. ‘This is the furthest point the group reached in its advance towards Baghdad, which is only a few dozen kilometres from here. Until recently, following ISIS’s devastating attack, Fallujah was cut off from the world. The fact that this hospital can now once more open its doors speaks volumes about how far Iraq has come.’

With support from a development cooperation fund, the Netherlands financed the rebuilding of the Fallujah Teaching Hospital and repairs to the city’s iconic bridge over the Euphrates, which Mr Blok also visited while he was in Fallujah. Alongside this support, additional Dutch aid to the region is helping restabilise it.

Over the past few years, the fighting with ISIS turned millions of people into refugees. The consequences have been felt not only in the region but also in Europe, including the Netherlands. Mr Blok visited a refugee camp in Jordan: ‘The countries around Syria are bearing a heavy burden,’ he said. ‘Bear in mind that almost one person in ten in Jordan today is a Syrian refugee.’ The Netherlands is helping by funding jobs and education for these refugees and supporting Jordanian communities that are hosting them.

The Netherlands, Jordan and Iraq are all members of the anti-ISIS coalition. Over the past few years Jordan has hosted the F16s that the Netherlands has committed to the fight. Now that their deployment has reached its end, the F16s are about to return to the Netherlands. Mr Blok paid a visit to the 150 Dutch military personnel in Jordan who will be heading home in a few weeks. ‘These men and women have made an essential contribution to the often fierce battle against ISIS, and I want to thank them for everything they’ve done,’ he said.