On 13 March foreign minister Stef Blok and foreign trade minister Sigrid Kaag visited the DFDS ferry terminal in Vlaardingen. The terminal is an important hub for trade with the United Kingdom. Mr Blok and Ms Kaag came to Vlaardingen to view the Portbase system for Dutch ports and ferries and to urge carriers to continue their preparations for Brexit. 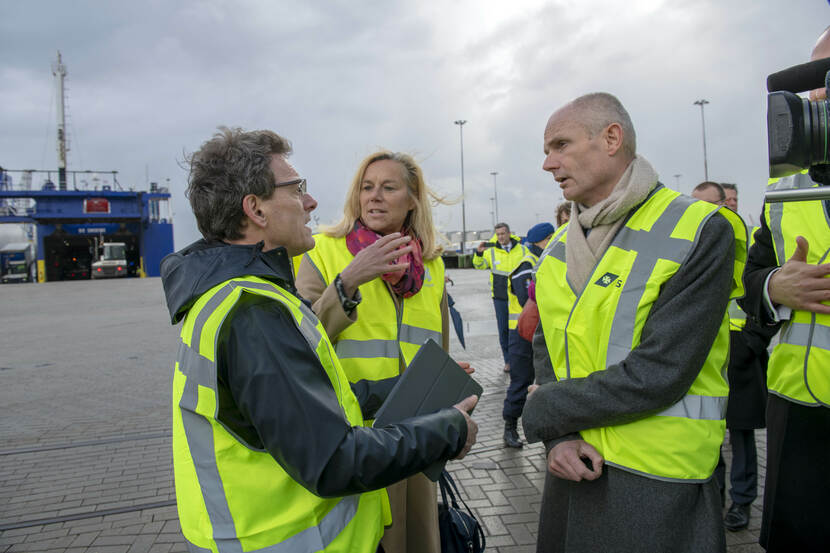 Representatives of the Customs Administration, the Netherlands Food and Consumer Product Safety Authority (NVWA), the Royal Military and Border Police (KMar), the Seaport Police and Rijkswaterstaat were also present.

‘We need the solutions for Brexit to come from London,’ said Mr Blok. ‘We’ve been following the latest developments and will continue to prepare for a “no deal” scenario. Businesses and members of the public should do the same, if they don’t want to miss the boat – literally and metaphorically.’

During the visit the ministers stressed the importance of carriers and forwarders continuing their Brexit preparations. They are advised to join the Portbase system as soon as possible. Even after Brexit, this system will allow cargo to be transported onto the ferry quickly. Ferry operators will soon make Portbase compulsory in order to minimise delays at Dutch ports. After Brexit the United Kingdom will no longer be part of the European Union. This will end the free movement of people and goods between the UK and EU member states. Customs formalities at borders will be inevitable.

‘The Netherlands has done everything in its power to prepare for Brexit,’ said Ms Kaag. ‘But the logistics chain doesn’t stop at the Dutch border. Transport and shipping companies in Poland and Germany, for example, also need to be aware of what to do in order to continue transporting their goods to and from the United Kingdom via Dutch ports hassle-free.’

Portbase to be made compulsory after Brexit

Portbase was developed by ferry operators, the Customs Administration, interest groups and the Amsterdam and Rotterdam port authorities in order to ensure that freight can be transported through Dutch ports quickly and easily – even after Brexit. Like the systems already in place at large container terminals, Portbase provides for fully digital and automatic completion of customs formalities, with optimum reuse of data. Portbase will soon be made compulsory at all ferry terminals. Carriers based in the Netherlands and other countries who have not yet joined Portbase must therefore do so as quickly as possible. More information is available at this website.

‘Are You Brexit-Proof?’ team

The Customs Administration is ready for Brexit, even in the event of a ‘no deal’ scenario. ‘For us, Brexit will mean an increase in the number of declarations and the number of businesses subject to customs formalities. The customs supervision here at the ferry terminals and elsewhere is also new,’ said the general director of the Customs Administration, Nanette van Schelven.

‘That’s why we’ve already taken on over 500 new staff members. In order to prevent logistical delays as much as possible, businesses need to make sure they also prepare properly and in time. The Customs Administration is doing everything it can to help them with this. We’re working closely with trade associations and other partners, we’ve sent out 72,000 letters providing companies with useful information, and our special “Are You Brexit-Proof?” team is actively approaching truckers at the ferry terminals to provide information. The team is calling on businesses inside and outside the Netherlands to prepare for Brexit. It is also informing businesses about what they can do – for example register with Portbase – to ensure a fast roll-on and roll-off after Brexit.' The campaign will last until 29 March 2019.