New elections to be held next year on St Eustatius

In October 2020 the people of St Eustatius will again go to the polls to elect a new island council. These elections are the next step towards the restoration of normal administrative relations with the island after the Netherlands’ intervention a year ago. This news was announced by State Secretary for the Interior and Kingdom Affairs Knops at a town-hall meeting with the Statian people about restoring order to the island’s governance 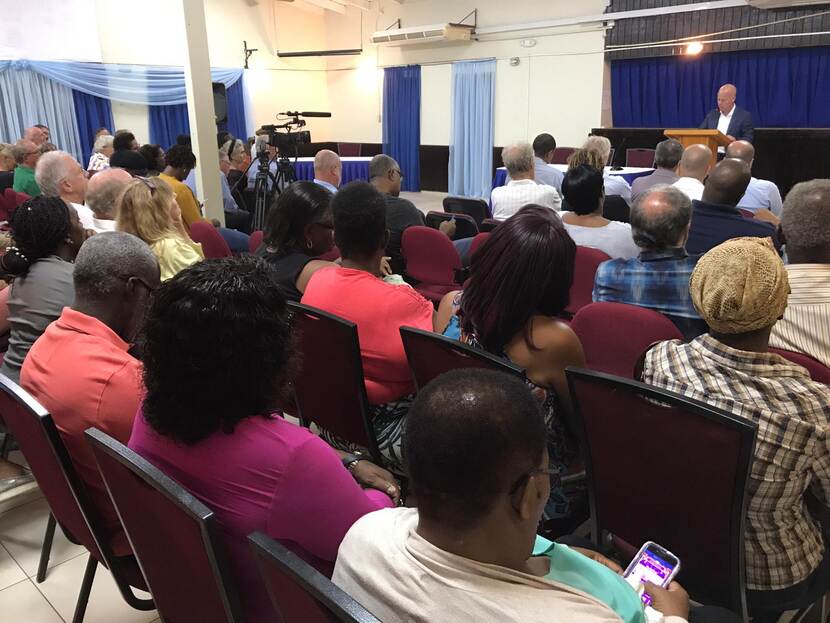 ‘The situation we found a year and a half ago was very serious,’ said Mr Knops. ‘A great deal of work has been done since then, and the initial results are already visible. Given the progress that has been made and my strong belief that the Statian people should be able to elect their own representative body, I intend to hold elections for the island council on 21 October 2020. This is a major step towards a gradual return to a normal administrative situation.’

At the town-hall meeting the state secretary reiterated that the intervention in February 2018 was necessitated by the gross neglect of duty on the part of the authorities of St Eustatius at that time. It was a situation characterised not only by lawlessness and financial mismanagement but also by discrimination, intimidation, threats and insults, arbitrary practices and the pursuit of personal power at the expense of the residents of St Eustatius. That state of affairs and the physical neglect of the island had far-reaching consequences for the daily life of the island’s people.

Thanks in part to the civil-service organisation and the residents of St Eustatius, the first results are now visible in both the physical and socioeconomic domains. For example, the eroded cascade on the cliff has been repaired, and efforts are now in full swing to stabilise the cliff itself. The State Secretary also remains focused on the issue of rainwater collection, in order to prevent further erosion and ensure that the agricultural and livestock sectors have an adequate water supply. Improvements have been made in the waste processing sector with the addition of a new incinerator, and 300 car wrecks have been removed from the island. The completion of the Cherry Tree project has been delayed, but it is expected to be complete in March next year. This year, the Ministry of the Interior and Kingdom Relations has set aside structural funding to lower rents, and a partnership agreement has been signed between the public body, the housing association Woonlinie and the Ministry aimed at the construction of new social housing on the island and the renovation of existing housing stock. An additional €400,000 euro has been earmarked to repair homes, and agreements have been made about the ‘social minimum’ (the reference points for socioeconomic security), which will result in higher benefit payments and lower social insurance payments, and the Bes(t) 4 kids programme has improved the level of childcare and before- and after-school care.

Redoubling our efforts to achieve a sustainable future

Despite the progress that has been made, there are still major backlogs in certain areas, and more time will be needed to make systematic changes. For this reason the parties concerned will continue to work gradually towards a sound administrative structure, an effective civil-service organisation and healthy financial management. This will provide a solid foundation on which newly elected island authorities can build.