The Clinton Foundation announced a partnership with the Government of the Netherlands to implement Climate-Smart Agriculture (CSA) in Malawi and Tanzania. The Government of the Netherlands will invest $3 million to expand the Clinton Development Initiative’s (CDI) smallholder farming program, adopted by President Banda in September 2012 as a cornerstone of Malawi’s national agriculture strategy, supported by international partners such as the World Bank, to amplify CDI’s positive impact on the environment. In support of the Climate Smart Agriculture Alliance, to be launched in South Africa later this year, the Clinton Foundation and Dutch government are partnering to scale-up Climate Smart Agricultural practices and increase the household incomes of smallholder farmers. 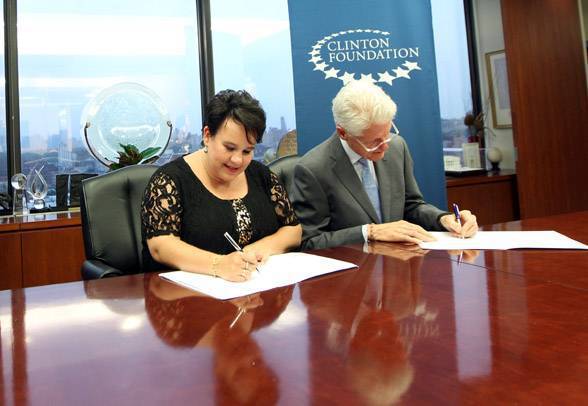 Since launching an agriculture program in Malawi in 2008, CDI has assisted tens of thousands of smallholder farmers to increase crop yields and lift their incomes, in part by lowering the prices of inputs and improving their access to markets. As a result, smallholder profitability among program participants in Malawi was 567% higher in 2011, on average, than in the year before the project began. With the Dutch grant, CDI will scale up this program in Malawi and replicate it in Tanzania, with a focus on CSA practices.

“Farming in a sustainable way, in a Climate-Smart way, is vital for our future,” said President Bill Clinton. “Our global economic growth over the long term depends on it, as does each individual agricultural community’s social and environmental welfare. I am grateful to the Government of the Netherlands for supporting my Foundation as it encourages Climate-Smart practices among smallholders in Africa.”

Amidst burgeoning global populations, rising demand for food and agricultural inputs, and changing climates, CSA takes into account the limits of natural resources and the effects of climate change. Many of the most effective CSA practices support natural re-nourishment of depleted soils, water retention within that soil, protection of surrounding watersheds and forests, and reduction of harmful emissions from agriculture. Africa stands to benefit most from climate-smart agriculture because of the high vulnerability of rural populations to climate change and dependence on agriculture for a majority of livelihoods. To feed the continent's 900 million people, Africa needs its own food security.

“Ensuring food security under a changing climate is one of the major challenges of our era. Agriculture is the solution to this challenge,” said Minister Dijksma. “As a country of farmers with great agricultural knowledge, it’s our responsibility to share that knowledge internationally through our companies and science institutes, and to grow the production of African smallholder farmers and help them develop new smart methods. Those farmers are the key to deliver the triple wins for food security, adaptation and mitigation.”“The world needs to act urgently to ensure food and nutrition security in the face of climate change. At the same time the way we farm and use land can have an important impact on the emissions which imperil yields and livelihoods” said Rachel Kyte, World Bank Vice President for Sustainable Development. “We can already see extreme weather increasing the vulnerability of the global food system. This is a global issue that demands a collective response.”

Improved agricultural practices have the potential to increase crop yields, reduce the vulnerability of small farmers to drought and floods brought on by climate change, and sequester CO2. The World Bank supports Climate-Smart agriculture through conservation agriculture and landscape restoration projects; research programs - such as the Consultative Group on International Agricultural Research - that focus on development of drought- and flood-resistant food crops; and innovative initiatives such as the use of Climate-Smart farming techniques; better weather forecasting; early warning systems; and risk insurance.

CDI works with 21,000 smallholders in Malawi, and plans to grow that number to 100,000 by the 2015-16 growing season. CDI now operates five commercial farms in Malawi, each of which serves as a hub for smallholder farmers, providing them with access to higher-quality and lower-priced seed, fertilizer, and other inputs. CDI has assisted smallholder farmers’ efforts to improve their organizations, and as a result many have secured small commercial bank loans to fund inputs and farm tool purchases. In Tanzania, at the invitation of the national government, CDI plans to begin operations in 2013-2014 with one commercial farm and 20,000 smallholders. CSA practices will be promoted in all locations, both among smallholders and at CDI’s commercial farms