In the coming years, Dutch agricultural businesses will invest more in Africa to create economic opportunities and increase food security by improving the production of smallholder farmers. Minister for Agriculture Sharon Dijksma will meet with former UN General Secretary Kofi Annan on 16 December 2013 to discuss close agricultural cooperation in Africa. 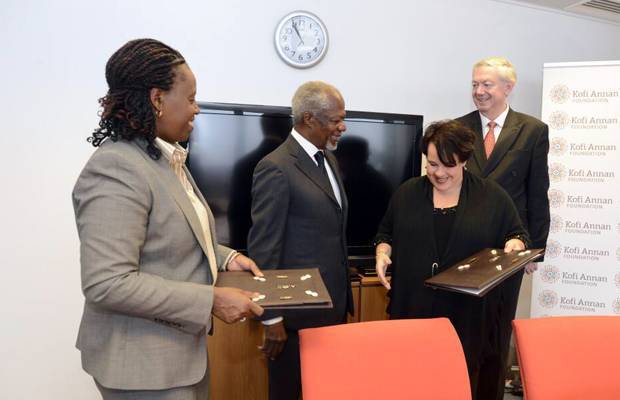 Dijksma and Annan’s organisation AGRA (Alliance for a Green Revolution for Africa) will enter into an agreement to reduce food shortages and increase the income of millions of smallholder farmers by setting up climate smart agricultural projects. Over the coming years, the Dutch government will invest 5 million dollars (3.7 million Euros) in cooperation between AGRA and agricultural businesses.

“Working together with Kofi Annan and AGRA will provide a new incentive to improve food security through our agricultural businesses and to create new economic opportunities through climate smart agriculture,” the Minister said.

AGRA’s objective is to increase food security in Africa through agriculture. Small farmers make up 70 per cent of the African population. AGRA considers the Netherlands an interesting partner, as in coming years the organisation wishes to focus more on growing vegetables and potatoes and on dairy, in addition to growing corn and cassava. The Dutch horticultural sector is a world leader and via horticultural businesses and Wageningen University it can pass on knowledge to millions of small farmers in countries such as Malawi, Tanzania, Rwanda and Kenya. This will also generate more business and market opportunities for the Netherlands.

There must also be a focus on developing new seeds and cultivation techniques must also get a prominent place to ensure crops require less water to grow. In addition, small farmers will learn how to plant trees in a climate-proof way while they will also become familiar with plant and crop diseases. Within three months, an AGRA working group and the Ministry of Economic Affairs will develop a plan to roll out climate smart agricultural projects through public-private partnerships.

In 2050, we will have to produce food for a global population of 9 billion people. Continuing the current procedures in food production will result in a shortfall of 60 to 70 per cent. Agriculture is the key to turn the tide, especially in Africa and Asia. Small farmers produce the lion’s share of food production, in difficult circumstances: unworkable soil, soil degradation, water shortages and bad market access. Through its position as agricultural world player, the Netherlands can play a key role in increasing food production.

In 2014 a food security alliance will be established, comprising 75 countries and organisations that will structurally roll out agricultural programmes according to the Dutch concept of climate smart agriculture.