The Dutch agri & food sector has further strengthened its leading position in the world market. In 2016, Agri & Food exports totalled almost 94 billion euros, compared to 90 billion in 2015. Agricultural products accounted for 85 billion euros and agricultural materials, knowledge and technology accounted for 9 billion: a new record. This means the agri & food sector now comprises 22% of total exports. This is shown by provisional figures from Statistics Netherlands (CBS) and Wageningen Economic Research. Minister for Agriculture Martijn van Dam announced these figures during the opening of International Green Week in Berlin, the largest international agricultural trade exhibition in the world. 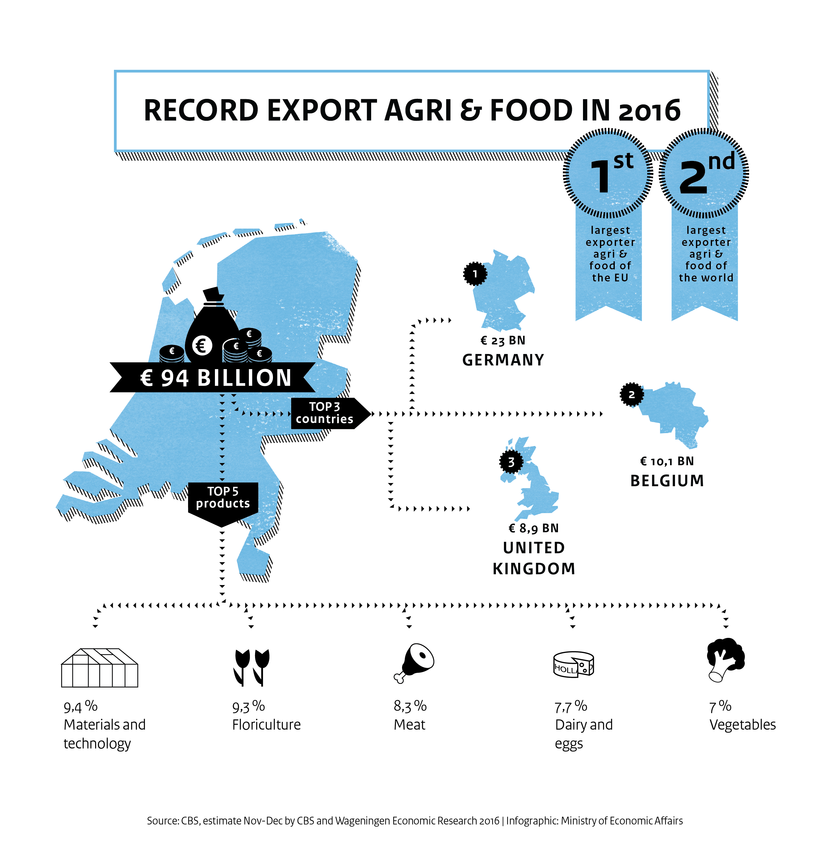 The export of agricultural products rose by over 3.6 billion euros (+4.4%) to 85 billion, the largest increase since 2011. The exports were mainly foodstuffs, such as vegetables, fruit, dairy, meat and processed products, in addition to high-quality floriculture. A noticeable factor is the increasing demand for Dutch agricultural materials, innovations and high-quality technology. Exports in this area totalled nearly 9 billion euros. Examples of such exports include energy-efficient greenhouses, precision agriculture systems (via GPS and drones) and new discoveries that make crops more resistant to the effects of climate change and diseases. In 2016, the import of agricultural products rose by 1.6% to 57.1 billion euros.

Minister for Agriculture Van Dam: "We have successfully reinforced our leading position in Europe and the world. Agri & food exports have significantly grown once more. “Made in Holland” is no longer a label reserved only for tulips and cheese. Our worldwide reputation in the field of agricultural knowledge and technology also continues to grow. In the future, we want to continue contributing to effective, healthy and sustainable food provision around the world. And our smart, innovative products and technology will allow us to do exactly that.”

In addition to the Netherlands' globally renowned agri & food sector, Minister for Agriculture Van Dam also wants to put Dutch knowledge and technology firmly in the spotlight. At the International Green Week (Grüne Woche), this is reflected in the combination of traditional elements such as tulips, “Frau Antje”, cheese and fish with innovative agricultural concepts that are significantly and increasingly boosting the sector's international standing. The Netherlands is represented by no fewer than 40 companies at the International Green Week.

Export of knowledge and technology

As well as being an important producer and global supplier of flowers, vegetables, meat and dairy products, the Netherlands is also increasingly exporting high-quality agricultural materials, knowledge and technology. In 2016, the export of commodities such as agricultural machines, fertilisers, special climate control systems and applications for the food industry brought in nearly 9 billion euros (+2.2% compared to 2015) on top of the 85 billion euros in traditional agricultural goods. The export of greenhouse materials grew the most (+370 million euros). This development seamlessly ties in with Minister for Agriculture Van Dam's vision for exports, which focuses on reinforcing the Netherlands' leading position in the agri & food sector by exporting knowledge and innovation in addition to traditional agricultural produce, and on helping to boost the sustainability of world food provision. This is also an important factor in eradicating hunger and malnutrition in the developing world. This contribution is a high priority during trade missions, with “green education” – another field in which the Netherlands is a world leader – playing a vital role. Recently, The Hague Centre of Strategic Studies concluded that, in addition to reinforcing the Netherlands' economic position, the export of Dutch knowledge can also contribute to solving global problems such as climate change and its impact on the world food supply.