By firing a 101-volley salute from 09.00 hrs, HNLMS Evertsen paid an 8-minute tribute to Queen Beatrix while sailing on the IJ lake, accompanied by the church bells and chimes of Amsterdam.

Moments before, Major General Marc van Uhm, Governor of the Capital, had inspected the Guards of Honour on parade on Dam Square and along the Nieuwezijds Voorburgwal. The Guards of Honour were formed by, among them, the Marine Corps and the ‘Prinses Irene’ Fusilier Guards Regiment. 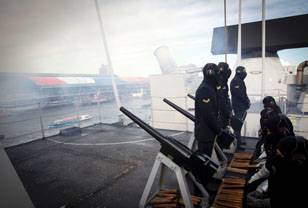 With a 101-volley salute fired from 09.00 hrs, HNLMS Evertsen paid an 8-minute tribute to Queen Beatrix

Not the first time

Renan Tok and Rolf de Raaf, ratings from the weapon-technical division of the Royal Netherlands Navy, operated the gun on  board HNLMS Evertsen. De Raaf: “It was a very special occasion, one you probably experience only once in your military career. Not everybody gets the opportunity to do this. We  had done this many times before at sea, but of course never before in the middle of Amsterdam and on an occasion as special as this one."

After the salute, the navy frigate moored and its crew offered assistance where needed throughout the rest of the day.

HNLMS Evertsen, which was christened by Princess Máxima on 19 April 2003, was not the only navy vessel  to fire an honorary salute. The ocean-going patrol vessel HNLMS Friesland also fired three honorary salutes on St Maarten, as did the salute batteries of the Royal Netherlands Navy on Aruba and Curaçao.

Another type of salute was given by hundreds of servicemen and women who had sent in their photographs for the National Salute. A selection of these photographs was published as a recruitment advertisement in today’s issue of Dutch newspaper De Telegraaf. With the National Salute, the servicemen and women of the Defence organisation congratulated the King on his ‘new position’.

Servicemen and women had arrived at the Amsterdam Naval Barracks (MEA) at the crack of dawn in order to change into their ceremonial dress. Approximately 1,100 servicemen and women, ranging from musicians in fanfare bands, members of the military Guard of Honour, palace guards, members of the royal escort to security officers, from all Services fulfilled various roles during the abdication and investiture ceremony. The MEA was used as the military support base throughout the entire day. Everyone was dressed, checked and prepared for the location where they were performing their duties. 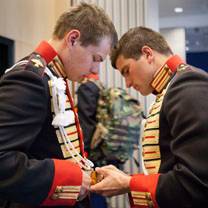 Grenadiers (King’s Own Company) prepare to form the Guard of Honour for the King and Queen.

Sergeant Major Hans den Braber and his colleagues of the Royal Netherlands Air Force formed one of the military Guards of Honour on Nieuwezijds Voorburgwal, which means he had to stand still for 2.5 hours. A good challenge. “I had never had to stand still and present arms for so long before.” But he had a clever trick. “By pressing my arm against my chest, I could keep my circulation going,” Den Braber explained.

In the middle of the street

Corporal Dennis Schnoink of the National Reserve Corps volunteered for this day. As a Guard of Honour on Dam Square, his biggest challenge was to perform the drill correctly and present arms at the right time. Schnoink: “Of course, there was the chance that we would not be able to see anything, but I thought it was wonderful to stand in the middle of the street right at the centre of things. It was the best way to get an impression of the atmosphere.”