Military attention for abdication and investiture in mission areas

Just as in the Netherlands, Queen’s Day and the investiture did not go unnoticed in mission areas of the Netherlands armed forces. Special flag parades were held in Turkey and Afghanistan and three cheers of “hoezee” sounded off the coast of Somalia. Glasses are set for a toast to the royal couple.

In Mazar-e Sharif in northern Afghanistan, where 4 F-16s and approximately 120 military personnel are stationed, the investiture was welcomed with a special salute to the new king. This ceremony was also a gesture of gratitude to the retiring Queen.

The new royal couple and the retiring Queen were of course also given proper attention in Kunduz, where the Dutch police training mission will run for a few more months before expiring this summer.

In the Afghan capital of Kabul, Dutch military personnel celebrated Queen’s Day together with police officers, civilians and a large number of foreign colleagues from the International Security Assistance Force (ISAF). The official flag ceremony demonstrated the Dutch community’s solidarity with the Royal House.

In Turkey, where a Dutch PATRIOT weapon system is stationed, the Dutch tricolour with orange pennant was raised to the sound of the national anthem. Before the abdication, the commander of the unit, Colonel Marcel Buis, reflected on the ties the Defence organisation has with the Royal House: “We are gathered here as Task Force in Turkey to pay our respect to Her Majesty Queen Beatrix and soon-to-be King Willem-Alexander, as well as to the Royal House, with which we affirm our solidarity.” After the flag parade, a toast was made.

A toast to the new King was also made on board HNLMS Amsterdam. The supply ship is currently not taking part in a mission, but nonetheless at sea as part of work-up procedures. The entire crew formed up in the hangar for a so-called All Hands,  and the ceremony ended traditionally with a loud whoop in honour of the investiture.

Off the coast of Somalia

Aboard HNLMS De Ruyter, currently deployed to the counterpiracy mission in the waters off Somalia, the captain of the ship, Commander Harold Liebregs, called an All Hands and looked back on Queen Beatrix’s reign. Furthermore, he expressed his hope that King Willem Alexander would be as successful as his mother. After three cheers of “hoezee” for both Princess Beatrix and the new King, the crew celebrated with cake with orange icing and a glass of orange bitters.
After the ceremony, the ship resumed its patrol off the coast of Somalia. 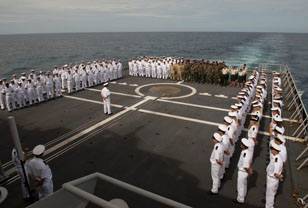 An “All Hands” on HNLMS De Ruyter