Change of command in Kunduz

Today, Colonel (MC) Marc Brinkman and civil representative Hans Peter van der Woude assumed command of the police training group in the Afghan province of Kunduz. They are the 5th and last management team of the mission, which will end on 1 July.

“Kunduz can count on our commitment. I hope we will be just as successful in collaborating with our Afghan and international partners as our predecessors were”, said Brinkman during the change-of-command ceremony this morning.

He and Van der Woude have taken over duties from Colonel Roland de Jong and Mr Geoffrey van Leeuwen, who were responsible for setting up the Afghan Training and Mentoring Teams in which Afghan policemen were trained to themselves provide police training to new police recruits.

Since the summer of 2011, the Dutch integrated police training mission has been laying a sound foundation for the entire judicial chain in Kunduz. Through so-called Rule of Law projects and police training, both the police force and the rule of law have been strengthened. In this process, relations between citizens and the government were always paramount: citizens must be able to rely on the judicial chain.

The transition to full responsibility for the Afghans has progressed faster than expected. Germany has therefore decided to phase out its mission in Kunduz this year. Given this planned departure of the Germans, the Netherlands has also decided to end its training mission this summer and start redeployment. 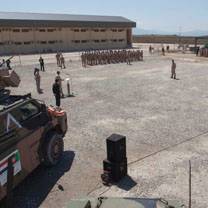 The change-of-command ceremony in Kunduz.