The royal couple received a gun salute as they proceeded to the Nieuwe Kerk on Dam Square. In line with the tradition accompanying the investiture of a new Head of State, the guns of the Royal Netherlands Army’s Gele Rijders fired their salute at 5-second intervals from the south bank of the IJ lake. On their way to the church, King Willem-Alexander and his wife were accompanied by a royal escort, which included delegations from the Navy, Army, Air Force and Marechaussee. 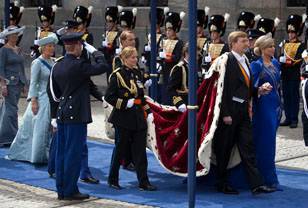 The royal couple received a gun salute as they proceeded to the Nieuwe Kerk on Dam Square.

The Sword of State, the symbol of regal power, and the Standard of the Kingdom, the symbol of the nation, were carried by the Chief of Defence, General Tom Middendorp, and the Inspector General of the Armed Forces, Lieutenant General (MC) Ton van Ede respectively.

Other participants of the escort were Captain (MC) Jurjen Abma, who was awarded the Cross of Merit for his bravery in Afghanistan, and Captain Arno Mulders, who was injured by a roadside bomb in Afghanistan and is now working to promote the interests of service members wounded in action.

First Lieutenant Arija Roelofs of the Royal Netherlands Marechaussee was given the honour of joining the royal escort as aide-de-camp to the Chief of Defence, and therefore able to witness the investiture at very close range. “I think every moment of the day will leave a huge impression. It is all very exciting and I hope I will not be distracted too easily when I walk the carpet.", she said beforehand. 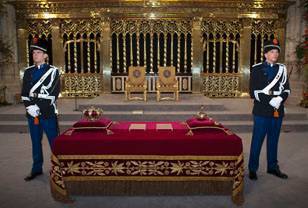 The Royal Netherlands Marechaussee played a prominent role during the ceremony anyway. Marechaussee personnel in ceremonial dress guarded the so-called credence table in the Nieuwe Kerk. On this table were the regalia or royal insignia, which symbolise the power and dignity of the King. They were commissioned by King Willem II and manufactured in 1840 by several goldsmiths. The Nieuwe Kerk had a double sentry guard as well as a double row of 10 marechaussees posted outside. Double sentries are posted at all entrances of buildings where members of the Royal House arrive and depart.