The Dutch company Royal Vopak and the Dutch centre for the promotion of trade, Nederlands Centrum voor Handelsbevordering (NCH), have signed economic cooperation agreements with partners from the Chinese port of Qingdao. The signing took place during the official visit to the Netherlands by Mr Li Qun, Party Secretary of the City of Quingdao. 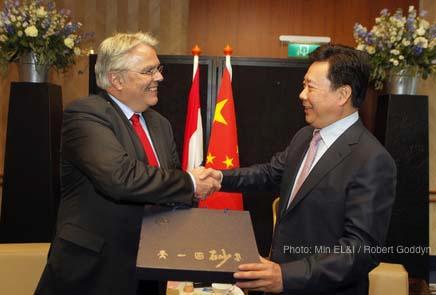 Mr Li Qun is making an official visit to the Netherlands from 10 to 12 May. China and the Netherlands wish to use this visit to strengthen economic ties between the two countries. The Chinese visitors will also visit the Floriade in Venlo in preparation for their International Horticultural Expo to be organised in Qingdao in 2014. The delegation from Qingdao will visit FloraHolland in Aalsmeer, the Floriade in Venlo and Vopak in Rotterdam.

Two agreements were signed in the presence of Party Secretary Li Qun and Chris Buijink, Secretary General of the Ministry of Economic Affairs, Agriculture and Innovation: an MoU between Royal Vopak and Qingdao Port Group, and an MoU between the Dutch centre for the promotion of trade, Nederlands Centrum voor Handelsbevordering and the Municipality of Qingdao.

Vopak is one of the world’s leading providers of storage facilities for bulk liquids operating in 31 countries. Vopak and the Qingdao Port Group wish to strengthen their strategic cooperation for their mutual benefit. Vopak hopes to encourage more Dutch businesses to follow in their wake.

In signing their MoU the NCH and Qingdao aim to strengthen their economic relationship and promote investment by bringing businesses together in symposiums, trade fairs and trade missions.

As Party Secretary, Li Qun holds the highest position in the Chinese Communist Party in the City of Qingdao. Qingdao, with its 2.5 million inhabitants, is an important city for the Party.

In 2014 Qingdao is organising a Hortifair expo and wishes to learn from the experiences of Floriade in Venlo. Qingdao is also seeking cooperation with the Netherlands in the top sectors agrifood, water, logistics, high-tech and financial services. Since 2002 Qingdao has been twinned with the Dutch town of Velsen. The Chinese Province of Shandong is partnered with the Province of Noord-Holland. This year the Netherlands and China are celebrating 40 years of diplomatic relations.