Foreign Investment in the Netherlands Creates 9,300 Jobs in 2015

More than 300 foreign companies like Tesla and easyJet jointly invested € 1.87 billion in the Netherlands last year. Together these companies created an additional 9,300 jobs. The Netherlands Foreign Investment Agency (NFIA) and its regional partners assisted in the attraction of these investment projects. In the past year they joined forces under the Invest in Holland label. As an operational unit of the Dutch Ministry of Economic Affairs, the NFIA is responsible for the realization of 7,779 jobs.

Dutch Minister of Economic Affairs Henk Kamp noted: ‘In 2015, foreign companies added thousands of new jobs in the Netherlands. This confirms once again that our country offers an attractive location for foreign investors. The Dutch are highly educated, we have an excellent infrastructure and our digital highways are among the top in the world. These investments are important, they boost our economy and create jobs for a lot of people. That’s why it’s a good thing that the NFIA has strengthened ties with its regional partners and will continue to devote itself to attracting new Dutch jobs in years to come.’

NFIA’s work also comes within the Minister Foreign Trade & Development Cooperation’s area of responsibility. Minister Lilianne Ploumen said: ‘Thanks to the NFIA, jobs are added in the Netherlands. Companies from the US and Canada gladly establish themselves in our country and we will continue to encourage that. For example, this year we will try to attract even more Canadian companies via the Dutch Consulate in Toronto. However, upcoming markets remain of interest as well: more than a quarter of projects in 2015 came from China, India, Turkey and Brazil.’

Most jobs are created at new headquarters (2,500), production facilities (1,200) and distribution centers (1,190). Examples of foreign investment projects are the American fashion brand Michael Kors, which is building a large distribution center in Venlo, and the American fashion chain Forever 21, which decided to expand its European distribution capacity in Bergen op Zoom. Moreover, ExxonMobil will construct a hydrocracker in Rotterdam and Tesla expanded in the Netherlands with a new factory for electric cars in Tilburg. As for other parts of the world, Indian pharma and biotechnology company Cipla opened a laboratory in Bilthoven, and the British easyJet opened a new hub at Amsterdam Airport Schiphol.

The Invest in Holland network promotes the Netherlands abroad as an attractive country to invest and set up business, and helps interested foreign companies establishing or expanding their international activities in the Netherlands. The network started early in 2015 and will focus mainly on projects in key sectors like Chemicals, Agrifood, High Tech Systems, Life Sciences & Health and IT.

More info at the Invest in Holland platform. 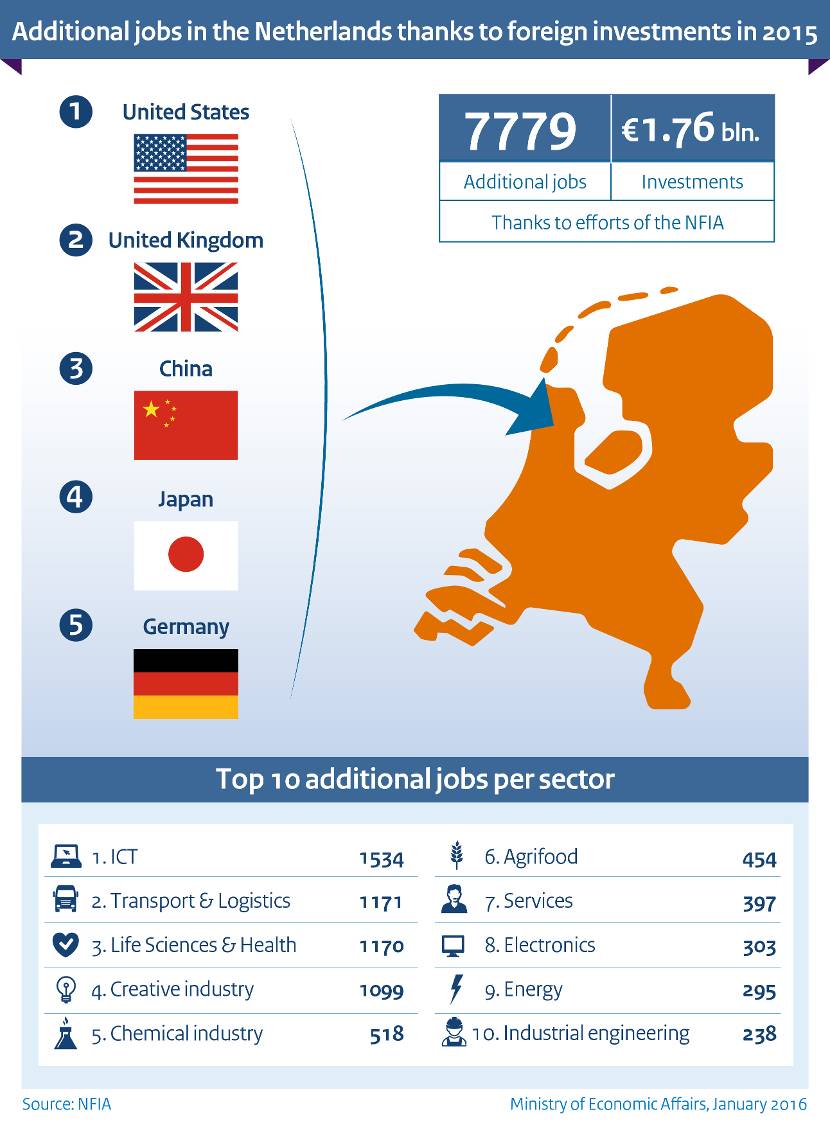