The work of human rights defender Justine Masika Bihamba and her organisation is vital to women and their families in the province of North Kivu in the Democratic Republic of Congo (DRC). Minister for European Affairs and International Cooperation Ben Knapen announced the Netherlands’ continuing support for her work after meeting with her on Wednesday. The Netherlands awarded the Human Rights Tulip to Ms Masika Bihamba in 2008.

For safety reasons, she is currently living with her family in a European country. She received threats after criticising former general Bosco Ntaganda, who is wanted by the International Criminal Court. The Netherlands joins the United States and national human rights organisations in the DRC in calling for his arrest and prosecution in The Hague and will draw attention to this matter within the European Union. The Dutch ambassador to the DRC raised this issue with the provincial authorities this week.

Mr Knapen and Ms Masika Bihamba discussed her organisation’s plans to build a second shelter for women who have been raped. The minister visited her organisation a year ago and was impressed by the fantastic work she and her people are doing. 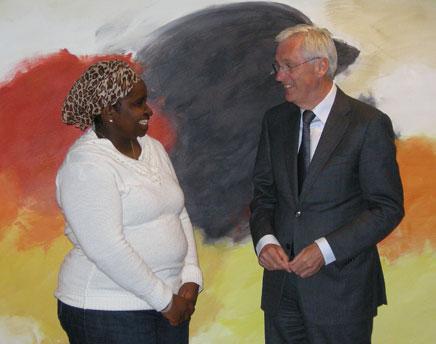