As of 2021, the Cabinet will apply withholding tax on interest and royalties in a highly targeted approach to tackle money flows amounting to €22 billion to low-tax jurisdictions. This was revealed in a study by SEO Economic Research commissioned by the Ministry of Finance.

SEO has mapped out financial flows through the Netherlands through letter box firms. It shows that in 2016, €199 billion in dividends, interest and royalties flowed out of the Netherlands. The vast majority, €177 billion, leaves the Netherlands for countries in which a normal tax rate applies, such as countries within the European Union and the US.

What the Cabinet finds unacceptable is money that passes through the Netherlands to countries with a low tax rate, because this means hardly any tax is levied on this money. The Cabinet is going to address this practice by applying a withholding tax on interest and royalties as of 2021.

State Secretary Snel for Finance: "Companies that genuinely contribute to our economy are welcome in the Netherlands. But our country must not be used solely to transfer money to tax havens. By applying the withholding tax on interest and royalties we are tackling this practice in a highly targeted manner. This means a major, robust step in the fight against tax avoidance. And the great thing is that this study provides us with the foundation to monitor whether this approach really works." 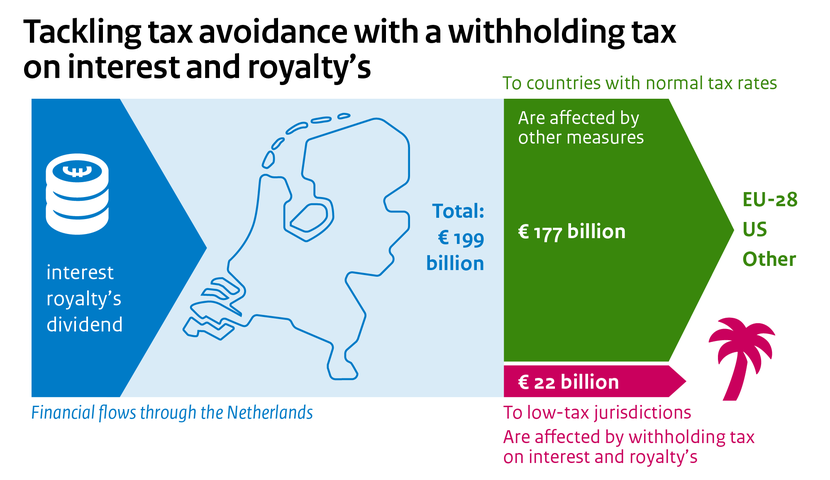 The Cabinet is doing more to combat tax avoidance; at the same time measuring the extent of tax avoidance is proving difficult. However, the development of the financial flows through the Netherlands is monitored on an annual basis.

In total 15,000 letter box firms in the Netherlands hold €4,500 billion. Of course, tax is not levied on this balance sheet total, but only on incoming and outgoing payments (€199 billion). Therefore, this is the money flow that the SEO believes needs to be scrutinised.

SEO has not performed a detailed study into why the €177 billion flows through the Netherlands to other countries in the European Union and the US. One reason could be to reduce withholding taxes in a different country. In any case, it is important that it flows to countries in which a normal tax rate applies. Yet, a share of this flow could also involve tax avoidance. This practice is addressed via other measures, such as by including anti-abuse provisions in tax treaties and exchanging more information with other countries.

An important measure in this regard is the ‘principle purpose test’ that applies as of 2020, which a country can use to refuse treaty benefits if a company runs money through the Netherlands purely and simply to avoid tax.