The Dutch national government is aiming for 14% of all energy used in the Netherlands to come from renewable sources in 2020, and a minimum of 27% in 2030. The Netherlands also wants to achieve zero carbon dioxide (CO2) emissions from the energy supply by 2050. Offshore wind is an important form of renewable energy for meeting these goals.

Offshore wind energy plays a key role in the energy transition. The North Sea is a good place to install wind turbines due to:

The costs of offshore wind energy have fallen significantly in recent years, making it the cheapest large-scale source of renewable energy.

In 2019, offshore wind turbines generated approximately 1 gigawatt (GW) of power in total, a figure that will have risen to at least 4.5 GW in 2023. This commitment is enshrined in the Energy Agreement for Sustainable Growth. Offshore wind turbines will then supply 3.3% of all the energy in the Netherlands.

The Coalition Agreement and the Climate Agreement (2019) include a commitment to continue the successful offshore wind energy policy. This will result in offshore wind farms generating approximately 11 GW by 2030, which is enough to supply 8.5% of all the energy in the Netherlands and 40% of our current electricity consumption.

Following extensive consultation with a large number of involved parties, the government has presented the plans in the 'Offshore Wind Energy Roadmap'. This sets out, among other things, where and when the new wind farms will be built. By doing so, the Roadmap provides clarity to all stakeholders and ensures certainty for wind farm developers.

The area map below provides an overview of the locations of the wind farm zones. You can also download the Offshore wind energy area map. 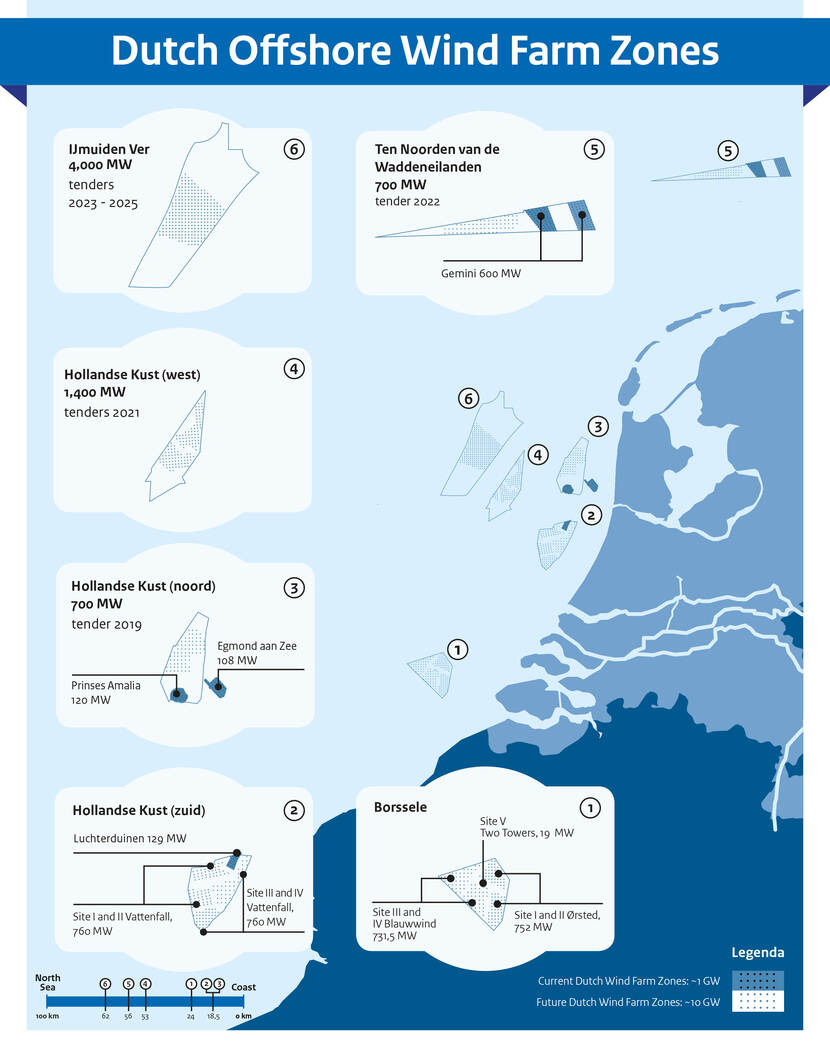 Between 2020 and 2023, two wind farms, each having a minimum capacity of 0.7 GW, will be constructed in the Borssele Wind Farm Zone, with a further three wind farms planned 18.5 km off the coast of the provinces of Zuid Holland and Noord Holland. This will be followed, between 2024 and 2030, by wind farms far out at sea to the west and north of the Netherlands in (parts of) the Hollandse Kust (west), Ten Noorden van de Waddeneilanden and IJmuiden Ver Wind Farm Zones.

The national government establishes all the conditions for planning and building wind farms, including their location, the measures to protect nature and the necessary permits. To this end, the government researches the structure of the site, the seabed, wind speeds and water data. This ensures that wind farm developers are provided with all the information they need in advance about how best to build the wind farm.

The national government allocates the sites on the basis of tenders, in which wind farm developers compete with one another for permits. In 2022 and 2023, the wind farms in the Hollandse Kust (zuid) Wind Farm Zone will be the first subsidy-free operational wind farms in the world. TenneT has been designated as the offshore grid operator. This means that TenneT is responsible for connecting the wind farms to the onshore power grid via the offshore grid.

Weighing of interests in relation to offshore wind farms

The national government takes the fullest possible account of other offshore and onshore interests when preparing and implementing the plans for offshore wind energy. A lot of space in the North Sea is already being used, by shipping and fishing and for oil and gas extraction, for example. There are also sand mining areas, Ministry of Defence training zones and nature reserves. At some locations, the sea is too deep to be suitable for wind turbines. The greater the distance to the coast, the longer and more expensive the cabling and maintenance will be as well.

As a result, determining the eventual location of wind turbines is a very delicate process. Relevant factors include affordability and energy yield, as well as the impact on nature and the other interests referred to above, among other things. The national government welcomes the opinions and input of stakeholders and other interested parties in the process of wind farm construction. The same also applies in respect of the procedures for installing the connections of the offshore grid. The precise location of the shore connection, both at sea and on land, is also discussed at length with local parties in workshops or during information evenings. In addition, anyone may submit an opinion on the final decisions.

You are free to contribute your ideas, join in the discussion or participate in co-decision during the various stages of decision making. For example, you can give your opinion on the decisions on offshore wind energy via the website of: