How are asylum applications by people from safe countries dealt with?

Since the beginning of 2016 the Netherlands has introduced the following measures. 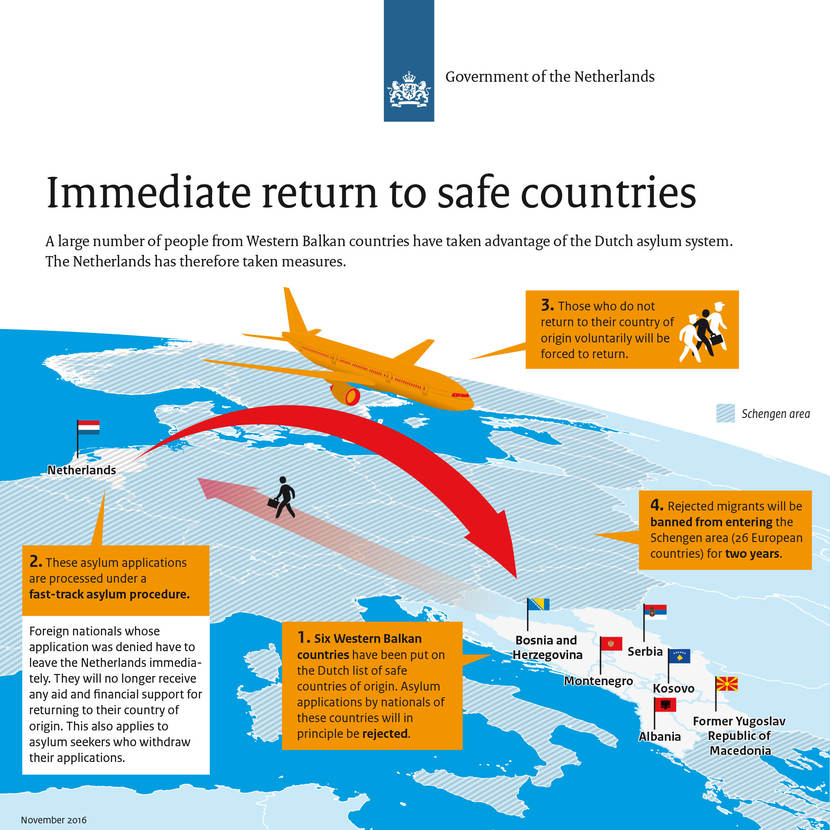 A large number of people from Western Balkan countries have taken advantage of the Dutch asylum system. The Netherlands has therefore taken measures.

The Minister for Immigration has adapted the Dutch list of safe countries of origin. The Western Balkan countries were put on the list in November 2015. These are Albania, Bosnia and Herzegovina, Kosovo, Montenegro, North Macedonia and Serbia. Asylum applications made by people from the countries on the list can be dealt with faster and are normally denied.

While their applications are being dealt with these asylum seekers remain at the central reception facility in Ter Apel.

After an application from a safe country is denied

If an asylum application is denied because the individual is from a safe country, they must leave the Netherlands immediately. They are also banned from entering the EU again for the next 2 years.

Following denial of their application, these asylum seekers are placed in restrictive accommodation to prepare for their departure. They can ask a court to review the decision to deny their application, but are not usually allowed to await the court’s decision in the Netherlands. They may however go to court to ask for a temporary order allowing them to stay. They can usually await the decision about the temporary order in the Netherlands.

If an asylum seeker comes from one of the countries on the list of safe countries, they do not have access to extra services during their short stay in the Netherlands. This includes the subsistence allowance, courses and workshops. Extensive daytime activity programmes are not arranged for them either.