In the Netherlands, Budget Day is known as Prinsjesdag or ‘Prince’s Day’, and is held on the third Tuesday in September. On this day, the King delivers the Speech from the Throne, officially opening the parliamentary year. The King’s speech contains the government’s key plans for the year ahead.

The third Tuesday in September

Formerly, Budget Day (Prince's day) was on the first Monday in November, and later on the third Monday in October. But this didn’t leave Parliament enough time to finalise the national budget before 1 January. So in 1848 Budget Day (Prince's Day) was brought forward to the third Monday in September. But this created problems. To arrive on time, members of parliament living outside The Hague had to set out on Sunday. Protestant politicians, especially, objected to travelling on a Sunday. So, in 1887 Budget Day was moved to the third Tuesday in September. 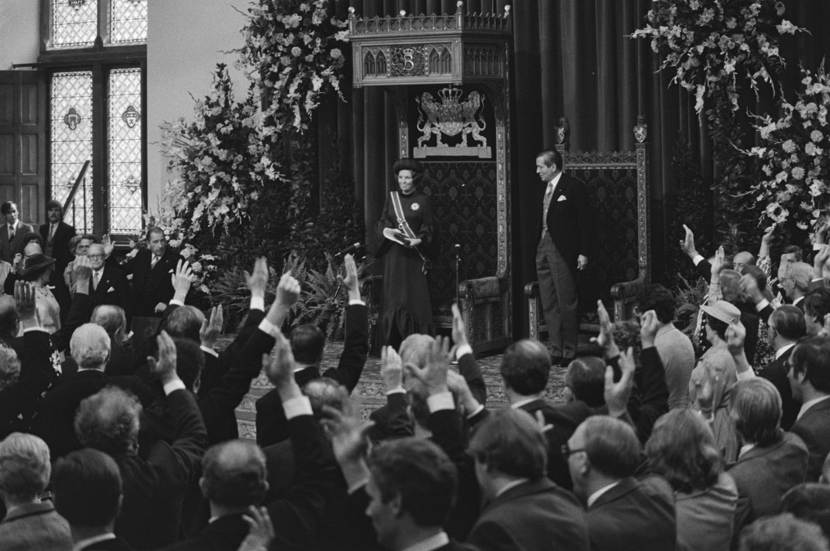 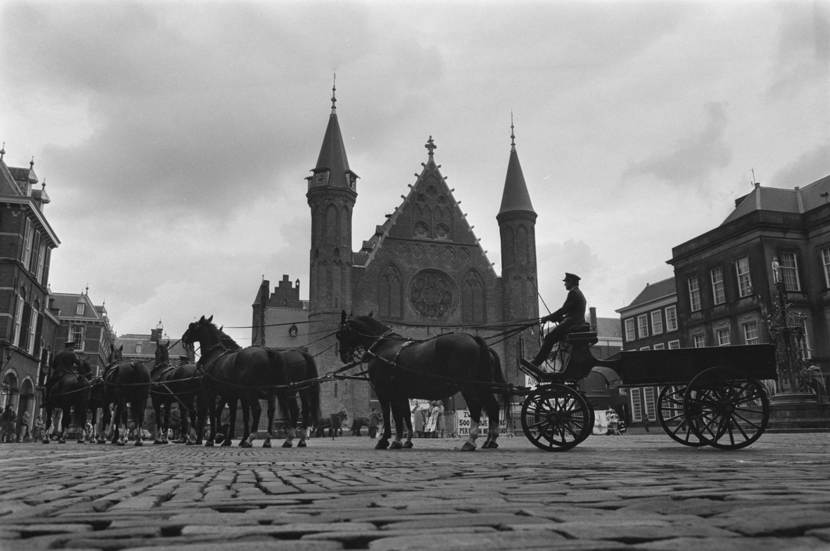 The name Prince's Day (Prinsjesdag) harks back to the 18th century, and the time of Prince William V. His birthday (8 March) was known as Prince’s Day. During the French occupation, supporters of the House of Orange-Nassau demonstrated their loyalty to the prince by continuing to celebrate this day.

No one really knows why, many years later, the name Prinsjesdag was given to the day on which Parliament opens. Nevertheless, even today it remains an occasion for people to show their affection for the royal family.

What is Budget Day?

What is Budget Day?

The Dutch parliamentary year starts on the third Tuesday in September.

On this day – known as Prince’s Day – the King and Queen travel in the Glass Coach to the Hall of Knights in The Hague.

Assembled there are the ministers, state secretaries, members of the Senate and House of Representatives, and distinguished guests.

Together, the Senate and the House of Representatives make up the States General.

The King opens the new parliamentary session of the States General by reading the Speech from the Throne.

In this official address, the King outlines the government’s plans for the coming year.

And then there is the ceremonial briefcase.

On Prince’s Day, the Minister takes the briefcase to the House of Representatives and presents the National Budget and Budget Memorandum.

The National Budget comprises the individual budgets of all ministries.

In essence, they are bills that must still pass through parliament.

In the briefcase, we can also find the Budget Memorandum which gives additional information about the budget.

In the Memorandum, the government unfolds its plans and provides the anticipated revenue and expenditure.

Revenue mainly comes from taxes and social insurance contributions,
but also other sources such as the sale of natural gas.

On the expenditure side, the government indicates how much it plans to spend, for instance on education, social security, health care and security.

It also comments on the national and international economic situation and gives an indications of the Dutch financial situation.

After Prince’s Day, it is the turn of the House of Representatives to respond to the government’s plans.

All the ministers and state secretaries assemble for the Parliamentary Debate on the Speech from the Throne,

which broadly discusses the government’s policy for the coming year.

The Prime Minister speaks on behalf of the government during the debate.

In October, the parliament debates financial aspects of the budget.

The Minister of Finance discusses the Budget Memorandum and budgetary policy.

In the following months, the budget of all government ministries are individually studied and discussed.

Once the members of parliament have given their consent, the plans can be put into practice.

The Speech from the Throne

On Prinsjesdag the King travels in the Glass Coach to the Hall of Knights in The Hague, where all the ministers, state secretaries, members of parliament and other guests are assembled. Since 1904 the head of state (the King or Queen) has read the Speech from the Throne in the Hall of Knights, announcing the government’s main plans for the year ahead.

Later that day, the Minister of Finance gives the House of Representatives an overview of the cost of the plans announced in the Speech from the Throne.

King Willem-Alexander delivers the Speech from the Throne in 2019.

The King and Queen arrive on the Binnenhof on Prince's Day.

Who writes the Speech from the Throne?

The Prime Minister drafts a provisional version of the Speech from the Throne, based on input from the other ministers. He also discusses the text with the King before it is finalised by the Cabinet.

The seating plan in the Hall of Knights is always the same. 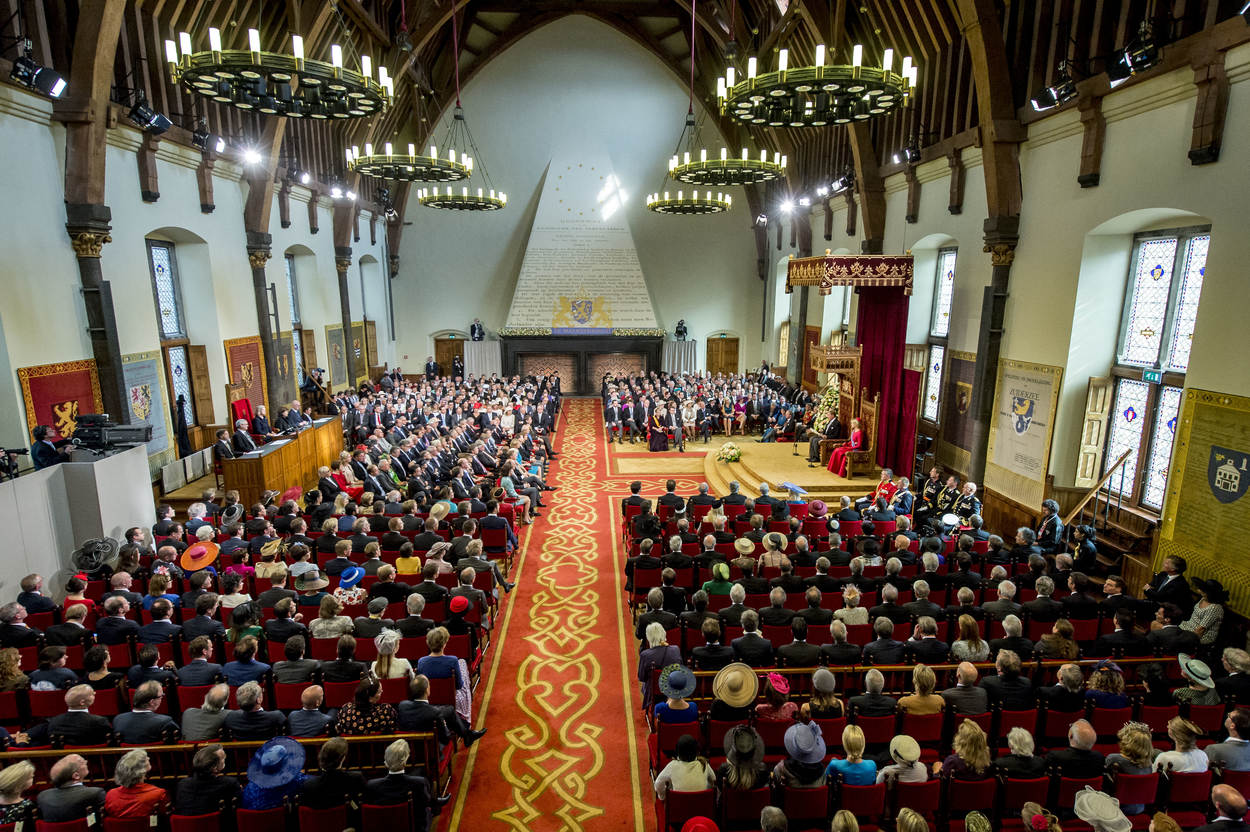 The King and Queen Máxima

Guest of the members of the States General

Guest of the members of the States General

Members of the Royal House

Staff of the Royal Household

Staff of the Royal Household