Why do people afflicted by conflict or disaster need mental health and psychosocial support (MHPSS)? For Peter Ventevogel, a psychiatrist and senior mental health officer at UNHCR, the answer to this question is obvious: MHPSS is vital for survival. 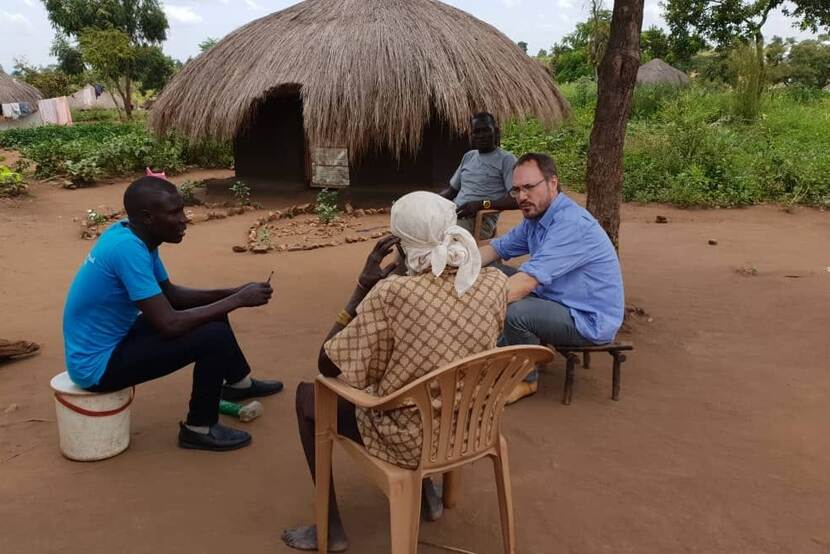 At the Amsterdam conference on the topic, last October, Peter remarked how attitudes among humanitarian organisations and workers have changed for the better over the past twenty years.

In various conference sessions, experts, policymakers and people with lived experience discussed scalable and proven MHPSS interventions that responders can apply worldwide. One approach to MHPSS is mobilising communities to support people with mental issues. Together with MHPSS pioneer Amanda Galappatti, Peter co-chaired a session on this specific approach.

Active involvement of families and communities is considered important in treating persons who are depressed or even suicidal. It is also crucial in addressing the needs of both displaced persons and members of the communities that host them. During the session, participants advised mental health workers in remote areas on daily dilemmas shared in video messages.

Watch the interview by video host Ikenna Azuike in which Peter talks about the conference, the session he co-chaired, and his experiences in the field.

The essential thing about MHPSS is
that it is empowering.

Actually, the people start to realise...

that despite their pain, despite
the suffering they went through...

they are actors in their own life.
That is why I do this work.

Peter, I understand you just led
a workshop on community mobilisation.

Yes, I co-facilitated a workshop
on mobilising and supporting...

so my co-facilitator, Ananda Galappatti
from Sri Lanka and I thought:

how can we actually do this? So we divided
the group in three groups of 20.

And we had facilitators
to introduce the topic.

So we had one facilitator
talking about community.

Working with communities.
We had another facilitator working about...

tensions between refugee
and host populations...

because often we see in emergencies...

that initially there is a lot of sympathy
and goodwill among the host population...

about the newcomers, because they see
the suffering and they want to help.

An outpouring of help often.

But then after a while we see that
the motivation or the views change...

and people say: why are they still there?
Why do they get more than we get?

Why do they use the firewood
that we want to use?

So you get competition over resources,
you get a kind of...

use the presence of refugees
for their own gains.

So you get all kinds of dynamics
in which local populations...

and displaced populations get bogged into.

The other topic was assessing
mental health and psychosocial needs...

in an acute context. So we had
someone telling about Yemen.

Someone who had done an assessment
in Yemen. Talking about that.

And then we had,
within the groups the people share.

It was really remarkable what knowledge
we have gathered here in this group...

from all continents, from all backgrounds,
with different experiences.

to people who were engaged with this topic
for the very first time.

In that last theme, was the idea that people
who are actually in the field...

were able to be part of the conversation?
And why is that important?

The thing is of course...

that we have an enormous variety
in people here...

but we are still all people
who are in policy making, managers...

and we wanted actually to engage
the people on the ground...

the people who do the work
from day to day.

So Ananda and I have asked people
that we knew in the field...

to make short videos of just three minutes
in which they introduce their work...

and in which they ask a question
or a dilemma. To the audience.

So, really beautifully, we had Jonas.
A young Ethiopian psychiatric nurse...

who works in a very remote refugee centre
in the west of the country...

But he faces problems with populations
that get very much depressed...

and people who even get suicidal.

I wanted to ask the seniors...

because it is difficult for me
in my situation.

People with sympathy disorders,
especially depression. They have...

In our set-up we're only giving
OPT, out patient treatment.

So people with a depression
they come after a suicide attempt...

so what is the solution?

In OPT to take a treatment
with a psychiatric patient.

Because when someone comes
after a suicide attempt...

there is no place to treat them.

We divided the participants
in smaller groups.

They talked about the different questions...

and they came up with answers and
solutions as far as that is possible.

Geert Smid – Psychiatrist at Centrum 45 in Diemen and professor of psychotrauma, loss, and grief after:

Hello, Jonas. We are very impressed
by your work you told us about.

Talking about depression and suicidality,
we thought of two approaches.

First is a family approach.
So to try to involve family members.

Another part that could be interesting
to consider...

and perhaps you've already thought about
is community engagement.

It was interesting that people from
different humanitarian emergencies...

could relate their own experiences
with what he was experiencing...

in that remote refugee camp.
So we made a video...

and we hope that in that way
people like Jonas...

can actually feel connected
to this important event.

To take a step back:
why is MHPSS support so important?

The services that MHPSS providers
give...

are really vital for survival.

So we had another example.
In Azraq camp in Jordan...

where you have Syrian refugees
already for the ninth year now.

They're losing hope. People think
they will be stuck there forever.

discuss their dilemmas,
we don't always have easy solutions.

Discuss their dilemmas and try to find
support with each other...

and try to find solutions to come to more
positive coping mechanisms...

positive ways to deal with the situation,
are really important.

Something that struck me
at this summit is...

that there seem to be quite a lot of
Dutch organisations involved in this field.

Is that a new development?

that the Dutch have played
an important role in the field.

When I started, people thought
I was a little bit mad myself...

that I would engage
in mental health support...

in Afghanistan, the country where I worked.
There were quite a lot of them.

And because we've been there for so long,
I'm now with UNHCR...

my colleague from the World Health
Organisation is Dutch...

we have several very good researchers
in the field...

we have good organisations.
I don't know why it is.

I think the Dutch have a tradition of being
open and being holistic in their looks.

I think MHPSS is also something
we could be proud of...

because the government
of the Netherlands...

without perhaps realising it...

was one of the most generous donors
over the last decade...

But it hasn't got the high-level attention
that it gets now.

With this summit of course.
This is very high-level.

The queen is here today, I understand.

It doesn't really get
much higher level than that.

What are your expectations of the summit?

A lot is going on and we have quite a lot of
methodologies, a lot of activity we can do.

What we miss is a package
that brings it all together...

we call it a minimal essential service
package that brings it all together...

and when a new emergency happens,
which God may forbid, but it will happen...

that actually we are ready.
That we can then say:

Okay, bring in one, two, three, four
and we're going to do it.

Now we see too often that the response for
mental health and psychosocial support...

is a little bit fragmented.
This conference may actually help...

Just to say: don't talk about it,
it is important.

And then make it tangible.
The concrete steps that we can take.

And basically I can tell you: the more
money we get, the more we can do.

So it depends a bit on the donors...

but even with limited extra money
we can do things. That's the issue.

But with no money we can do nothing.
It's clear.

Can you recall when was the last time
that you felt 'this is why I do my job'?

Perhaps that was a while ago.

where we have a lot of refugees
from South Sudan. Almost a million.

And I talked with women who had been
in a kind of group counselling session.

Very enthusiastically they talked
about their livelihoods activities.

About their chickens, whatever,
and that their life had changed...

and how important it was. So then I talked
to them and I was teasing them a little...

and I said: So that was really
what made the change.

Livelihoods are important. So that's
what we need to do with refugees...

and this counselling you started,
maybe we should leave that.

And then they said: but no. And then
they gave the answers that struck me.

They said: I couldn't do these livelihoods
activities, I couldn't learn new things.

My head wasn't ready. My heart was
too heavy. My head was full of thoughts.

I was only sitting in my hut,
even thinking about dying.

So what I see is,
sometimes if you're in the field...

and you see how people are able
to move on with their lives...

and take opportunities that are there...

not always many,
but there are always some opportunities...

but people are not able to grab them,
because they are too much depressed...

And psychosocial support
can help get that whole process going.

What we really need to do is
to have global solutions...

that for example we know that certain
methodologies can be done.

Five sessions of psychotherapy
with specific techniques can work.

I can train nurses in five days.
Give them a crash course in mental health.

So there are many techniques,
global solutions, that work everywhere.

But we need to localise them
and contextualise them...

and to adapt those global solutions to
the local context by using the right words...

but also of course by making people feel...

that it is them
that are part of the solution.

Still, too often in humanitarian work
we come in...

and we do things for them,
because they're suffering...

or they're hungry and poor, whatever,
and the essential thing about MHPSS is...

that it is empowering.
Actually, the people start to realise...

that despite their pain, despite
the suffering they went through...

they are agents, they are actors
in their own life.

And that is why I do this work.

MHPSS is so empowering.
How far can we take it?

Is it something that can be taught
in schools even? Whether it's...

For sure. I mean, basically
in my organisation, in UNHCR...

we say MHPSS is not a sector
that just a few specialists do.

We need to realise it within
the activities that we do.

And education is one of them.
And basically...

the goal of education is to make sure that
all refugee children, all children can learn.

Equally. However, to realise that
for displaced or refugee children...

you need to do a little bit extra
to help them...

so that they can then participate
in educational activities.

So it's an important part to integrate
MHPSS in education.

Training teachers, and parents as well.

-Thank you very much.

Mohamed Elshazly: ‘No one chooses to be a refugee’