Aweng Chuol speaks out on mental healthcare for refugees

Aweng Chuol is a world-famous model. Of South-Sudanese origin, she was born in a Kenyan refugee camp. As a child, she never imagined that she would one day walk the catwalks at fashion shows. 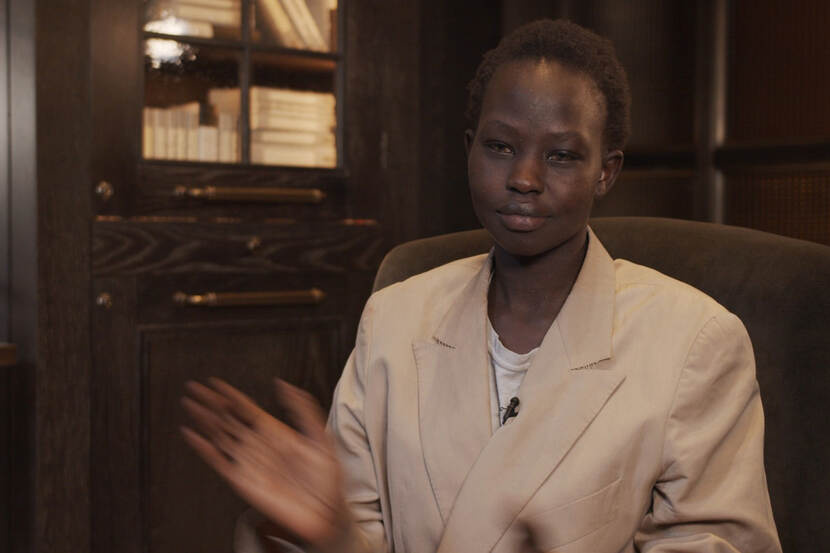 But there she is now, shining in the spotlights in cities like London, Milan and New York. She studies law and psychology as well. Full of ambitions and dreams, she never forgets how far she has come. ‘Only now am I processing my childhood experiences.’

There is a strong personal reason for Aweng’s work for mental healthcare for refugee girls, and her advocacy of organisations like War Child and Children in Conflict. Her father was a former child soldier who stayed fighting on South Sudan’s battlefields when she left for Australia in 2006. He died from an infected bullet wound in 2012. ‘I owe it to this man I never knew to work alongside with people who would have helped him if he were here,’ she says.

The theme of the International Conference on Mental Health and Psychosocial Support in Crisis Situations, in Amsterdam on 7 and 8 October, is one that is very close to Aweng’s heart. ‘Being a refugee, your psychological state is always a matter.’ In between shows at London Fashion Week, she recorded this message for the conference:

Aweng Chuol speaks out on mental healthcare for refugees

Aweng walks on a fashion catwalk.

My first 6, 7 years were filled with movement and anxiety. And a lot of death and the smell of death. So, when I became an adult, until now, I still try to register these memories that I have. And these, you know, things that I think about of that a child should not think about. There were times when you had to leave your camp. Because, an attack would come.

And then the panic of: Where are you going next? Everyone in my camp was like, where are you going next? What are we doing next? Everybody was trying to leave. But they don't know where they were going. And I just felt like, that whole refugee that was when I realized, that we don't have a home. My father was a child soldier. He died because of an infection from a gun. Back in the days, he got shot. The bullet was left in there. Because, if they took it out, he would die instantly. Before he died, he actually sat me down over the phone and he was telling me all his wishes for me and how I should just continue do what I want to do. And that's just it.

Aweng, her mother, brothers and sisters are accepted as refugee in Australia. As soon as we left, I still had a fear of, where are we going next. We are probably not going to be there forever and that's just that. We were in a struggle. We were safe. We had a house. We had everything. But I still felt as if like there was something still coming. I was working at McDonald's. And I was about to leave my shift. And this lady stopped me and said 'I love your face. I love your scares. Here is my card.'

And then eventually she walked back to me and said: You want to go to Paris? Do you want to sign a contract? And I was like, Paris? Where is Paris? That is so far away. Where is that? And I did one of the biggest shows in the world in Paris. Sometimes I have to pinch myself. Like, I am here. I am really here. I get to wake up. I have a safe home. I have safe homes! I have flights on flights on flights. And I have a team that really believes in me. I couldn't fathom this 3 or 4 years ago.

Title: Her career as a model is going global. Aweng still finds time to be an activist for War Child and Children in Conflict and studies Law and Psychology as well.

That is probably the common ground. That was the subconscious thought that pushed me to go to Psychology. The fact that I have experienced it. I've seen it. I've watched it. I was constantly watching it. Because it is something that happened or is happening around me. So I feel like, being a refugee, your psychological state is always a matter. War Child and Children in Conflict, was an ode to the man I never knew, my father. And I felt working with them was like almost like working alongside people that would have helped my father, if he was here. I will help these kids that will one day be someone's father, mother. Or someone’s sister or brother. I will be alongside you guys, in everything you do.

End title: Ministry of Foreign Affairs The international conference on Mental Health and Psychosocial Support in crisis situations will take place on October 7 + 8 in Amsterdam.