‘Children are self-harming and falling silent’

Two women in white medic vests push an Afghan man onto a chair. His friend speaks to him in Dari, trying to calm him down. ‘Try to relax,’ says one of the doctors. The man calms down for a moment and his eyes flicker from the concerned faces around him in the cramped room to the grey walls, the harsh fluorescent lighting and the shelves in the medicine cupboard.

Then he raises his left arm. He shakes his head and says, despairingly, ‘I was alone, I’m still all alone. I’ve been here 13 months. I’m going to pieces. I’m going mad. Next time, I’ll kill myself.’

The ‘here’ he’s referring to is Camp Moria, on the Greek island of Lesbos. In Camp Moria people from countries including Afghanistan, Syria, Iraq, the Palestinian Territories and Congo wait to begin a new future. Since 2015 this is where asylum seekers have been identified and registered.

In the overcrowded camp stand huge portacabins, cut off from the outside world by wire fences and checkpoints. Each of them houses 20 to 30 people, who can usually be found sitting close together in rows, cigarettes in hand. Often, they sleep on nothing more than a grey blanket on the floor. There is a single, cold shower for hundreds of people. And at night, fights regularly break out.

Boats full of new migrants keep arriving. In light of the increasing overcrowding, violence and volatility in the camp, the situation is getting worse by the day. And, say Doctors without Borders (MSF), this is reflected by the number of children with psychological problems. The NGO has been providing medical assistance on the Greek islands since 2015.

In July and August 2019 alone, doctors saw 73 children who required urgent medical assistance. Of these, three had attempted suicide, while 17 had self-harmed. ‘Ten children were under the age of six, while the youngest was just two years old,’ says Apostolos Veizis, Director of the Medical Operational Support Unit at MSF Greece. ‘A lot of children stop playing, have nightmares, are scared to go outside and slowly withdraw into themselves. Some stop talking altogether.’

As a temporary solution NGOs try to make sure people have something to do during the day. The organisation Connect by Music provides music lessons in the camp. ‘One day, a father and daughter came to sign up for our music lessons,’ says Annita, one of the music teachers. ‘According to her medical notes, the daughter had tried to commit suicide. She had stopped talking and the father made it very clear that she was not to be left alone. Once she started music lessons, she gradually came out of her shell. We saw her stand up for herself and tell the group what she wanted to play on her guitar.’ 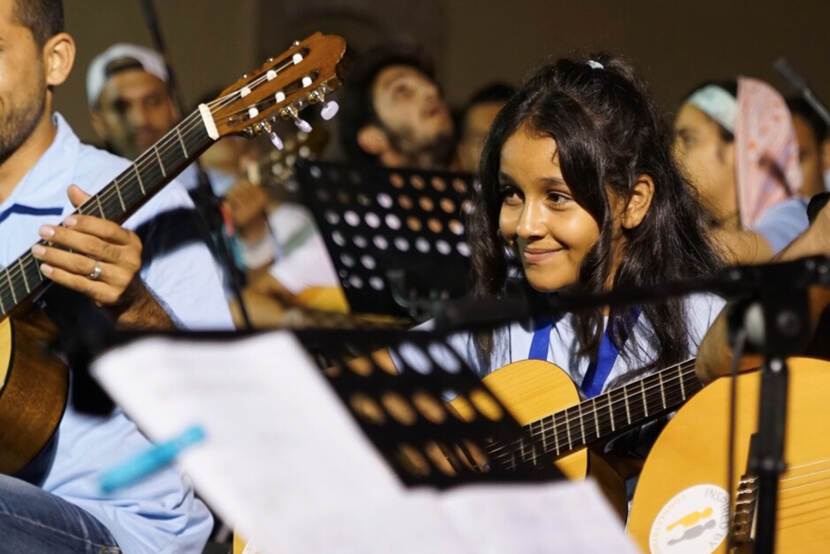 ‘These miserable conditions are worsening people’s mental health,’ says Nikos Gionakis, clinical psychologist and director of Babel, a mental health clinic in Athens for migrants and refugees. ‘Most people here come from countries where they’ve already experienced horrible things, such as violence and conflict. And they’ve also gone through a lot just to get here. Once in Greece, they find themselves in a situation that’s even more stressful: they have no idea what’s going to happen next. The harsh circumstances, the lack of prospects: it all has a serious impact on people’s metal state.’

In camps like Moria, humanitarian organisations do what they can, but it’s far from enough. Only in the most extreme cases are people referred to specialists, but as one organisation puts it, ‘Who do you refer if everyone is an extreme case?’

Akram – Refugee from Afghanistan:
I worked in the media, my job was my dream.
One day, there was a big surprise attack on our office.
That was very dangerous.
Some people, they don’t want us to work.
To share what’s going on to the world.
They are Taliban.
Because they said: "you are a pagan, you are a devil, you are not good for Islam.”

Music teacher:
Are you ready?

Akram – Refugee from Afghanistan:
For the first time since I crossed the border, I heard the guitar.
Oh my god, there is a guitar? I’m really excited, I want to see the guitar.
That was my dream, I want to play guitar, but I can’t, I couldn’t.

Adriaan Kok – founder Connect by Music:
The idea to bring a music school to refugees in Greece just came out of the blue
and we took action.
We took the plane two weeks later, going to Lesbos and permission was granted and I think two-three months after that moment we were up and running.

Screen text: Lesbos counts more than 11,000 refugees.
Akram is one of them, since early spring.
The 22-year young Afghan left everything and everybody behind…

Akram – Refugee from Afghanistan:
When I went to see my mom, she hugged me and said: “okay, you do what you want,
just be careful, god bless you.”
When I saw the water and the waves, very high waves, that was very dangerous for us and when I saw the face of the women and children I was really crying.
I said to myself we are not alone.
Don’t think about yourself, they are also here.
You have to be patient; you have to tell them not to worry and to calm down.
We will cross these waves.
It is not a nice place, sometimes, some people, some nationalities fight each other.
For what?
For food.
For what? Because someone looks a specific way at them.
This is the reason.

Screen text: What started as a project to give refugees something to do, has turned into much more than that.
As founder Adriaan Kok learned from a young woman.

Adriaan Kok – founder Connect by Music:
She showed her arms and her arms, on the outside, were full of scars.
Showing self-harm, auto mutilation and the inside of her arms were also full of scars showing that she tried to commit suicide.
And what she told us, smiling, she told us: “I feel so good and it is because I joined
this music program and it make me feel at ease.
I don’t experience my depression that strongly anymore.”

*People are playing music on the guitar.*

Screen text: Connect by Music has renewed its program: with a conservatory music therapist and neuro psychologist.
The seven music schools on Lesbos – in which 2600 refugees participated – give concerts inside and outside the camps.

people are taking the bus to the music school.

Music teacher:
We’re here just to show to you that music connects.

*People are playing music on the guitar and singing with the crowd.*

The crowd is watching the students perform.

*People are playing music on the guitar.*

The crowd is having a great time.

Logo of the Ministry of Foreign Affairs of the Netherlands appears on screen.

Screen text: The International Conference on Mental Health and Psychosocial Support in Crisis Situations will be hosted by the Dutch ministry of Foreign Affairs and takes place on October 7&8 in Amsterdam.
www.government.nl/mindthemindnow
Most of the pictures in this video are from the documentary “Vluchten in Muziek”.
Produced by the Dutch broadcaster “Omroep Max”.
We are grateful for their permission to use these images.
www.omroepmax.nl
Screen fades to black and video is finished.

A chance to rebuild their lives, that’s what people in Camp Moria want. The volunteers, the doctors and, above all, the migrants and refugees themselves.

Aid organisations are doing all they can, but more is needed to achieve a long-term solution. Mental health and psychosocial support must be part of the basic assistance provided in crisis situations, so that people are able to care for themselves and for others. The Minister for Foreign Trade and Development Cooperation, Sigrid Kaag, will be hosting an international conference on 7 and 8 October to help achieve this goal. Psychosocial support is not a luxury, but a necessity.

The story about the Afghan man is taken from a documentary for the Brandpunt television series, screened in early 2017, where television crews followed volunteer doctors from Stichting Bootvluchteling in Camp Moria over several days.